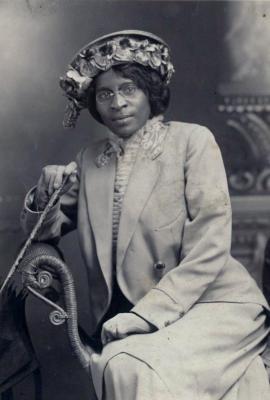 "Well may we add to our modern culture and educational efficiency some of the fine manners of...bygone days." - Charlotte Hawkins Brown

The end of slavery in 1865 appeared to offer African Americans in North Carolina new and challenging opportunities. Some became landowners, educators, politicians, and businessmen. Yet by 1900 "jubilation" had become "Jim Crow," and African Americans once again found themselves treated as second-class citizens.

During this period, however, leaders emerged who dedicated themselves to improving African Americans' status and quality of life. One such person was Dr. Charlotte Hawkins Brown.

While she was a student at Salem, the American Missionary Association offered her a teaching position in North Carolina. Dissatisfied with the lack of educational opportunities for Negroes in the South, Hawkins accepted. The 18-year-old returned to North Carolina in 1901 to teach rural African American youth in Bethany Congregational Church in Sedalia, Guilford County. The school closed after one term, but young Hawkins decided to remain in the community and establish her own school.

In 1902, after vigorously raising money in New England, Charlotte Hawkins founded Palmer Memorial Institute, a day and boarding school. Established in a converted blacksmith's shop, the school was named in honor of Alice Freeman Palmer, Charlotte's mentor and benefactor. Mrs. Palmer also was the second woman president of Wellesley College in Massachusetts.

In its early years, Palmer's curriculum emphasized agricultural and industrial education for rural living. Brown expanded the school to over 350 acres, which included a sizable farm. In succeeding years, the school began to  strongly emphasize academics and cultural education.

Palmer was the product of Dr. Brown's love, creativity, and vigorous leadership. The Institute was fully accredited by the Southern Association of Colleges and Secondary Schools at a time when few African American high schools enjoyed this recognition. During her 50-year presidency, over a thousand students graduated. They gained not only a diploma but also a firm idea of their own individual worth. Dr. Brown taught them well—they would be "educationally efficient, religiously sincere, and culturally secure."

Charlotte Hawkins Brown was a woman proud of herself and her people. She deeply believed in the American principles of freedom and justice for all human beings and expressed herself eloquently. She succeeded in showing for all the world to see what one young African American woman could do.

The nonprofit Charlotte Hawkins Brown Historical Foundation works cooperatively with the state and other interested individuals and organizations to promote scholarship, research, and the wider preservation and appreciation of North Carolina's African American heritage.