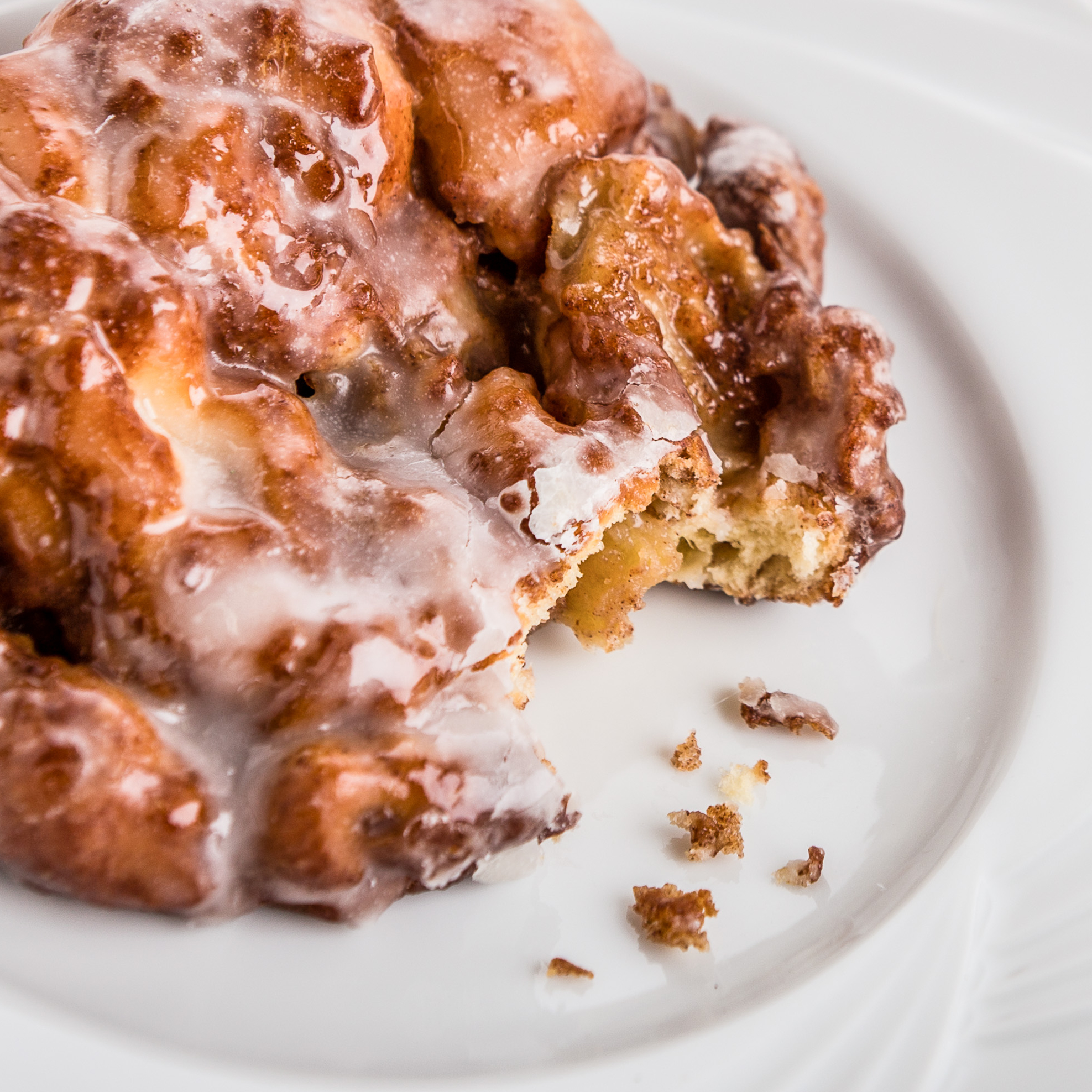 Make a batter, not very stiff with 1 qt. milk, 3 eggs and flour to bring it to right consistency, Pare and core dozen large apples, and chop them to size of peas. Mix well with batter. Fry in lard. Trim with powdered white sugar.” 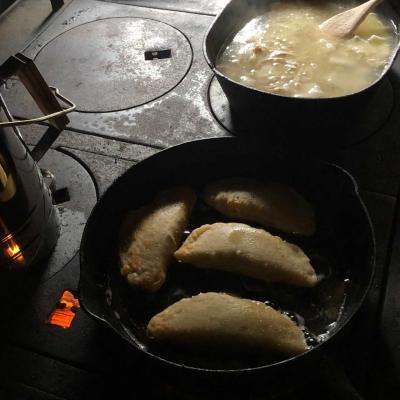 Fried pies may be made of any kind of nice fruit, having prepared it in a proper manner, but dried fruit is preferable to green. Stew it tender, mash it fine, and season it to your taste with sugar and spices. Roll out a sheet of plain or standing paste, nearly one-fourth of an inch thick, cut it in as many circular pieces as you wish pies, making them as large as common sized patty-pan; put your fruit in one-half of each piece, and turn the other half over, in the form of puffs, or half moons; cut them smoothly round the edges, closing the paste together, to keep in the fruit, and crimping or notching them handsomely; lay them in a pan of boiling butter, having plenty to cover the pies without having to turn them over, and fry them until they are a nice brown on both sides; then raise them carefully, drain them on an inverted sieve, grate loaf sugar over them, and send them to table warm. The butter in which they are fried may be used for seasoning brown gravies, &c.

This paste is generally used for fruit pies, fruit dump and rolls. Sift three pints of flour, rub well into it one pound of fresh butter, a spoonful of salt, and make it a good paste with sweet milk; knead it well, and beat it with a rolling-pin till quite smooth.

Place dried apples in large saucepan, cover with water. Simmer until tender. Sugar and cinnamon to taste may be added. Cool.

To make pies: Roll a ball of dough into a thin circle about 5 inches across. Place 2 tablespoons of cooked apple mixture on center of circle. Fold one side over and crimp edges with a fork. Fry in lard on medium heat until lightly browned. Makes about 20 pies.

Cider for apple butter must be perfectly new from the press, and the sweeter and mellower the apples are of which it is made, the better the apple butter be. Boil the cider till reduced to one half its original quantity, and skim it well. Do not use for this purpose an iron kettle, or the butter will be very dark, and if you use a brass or copper kettle, it must be scoured 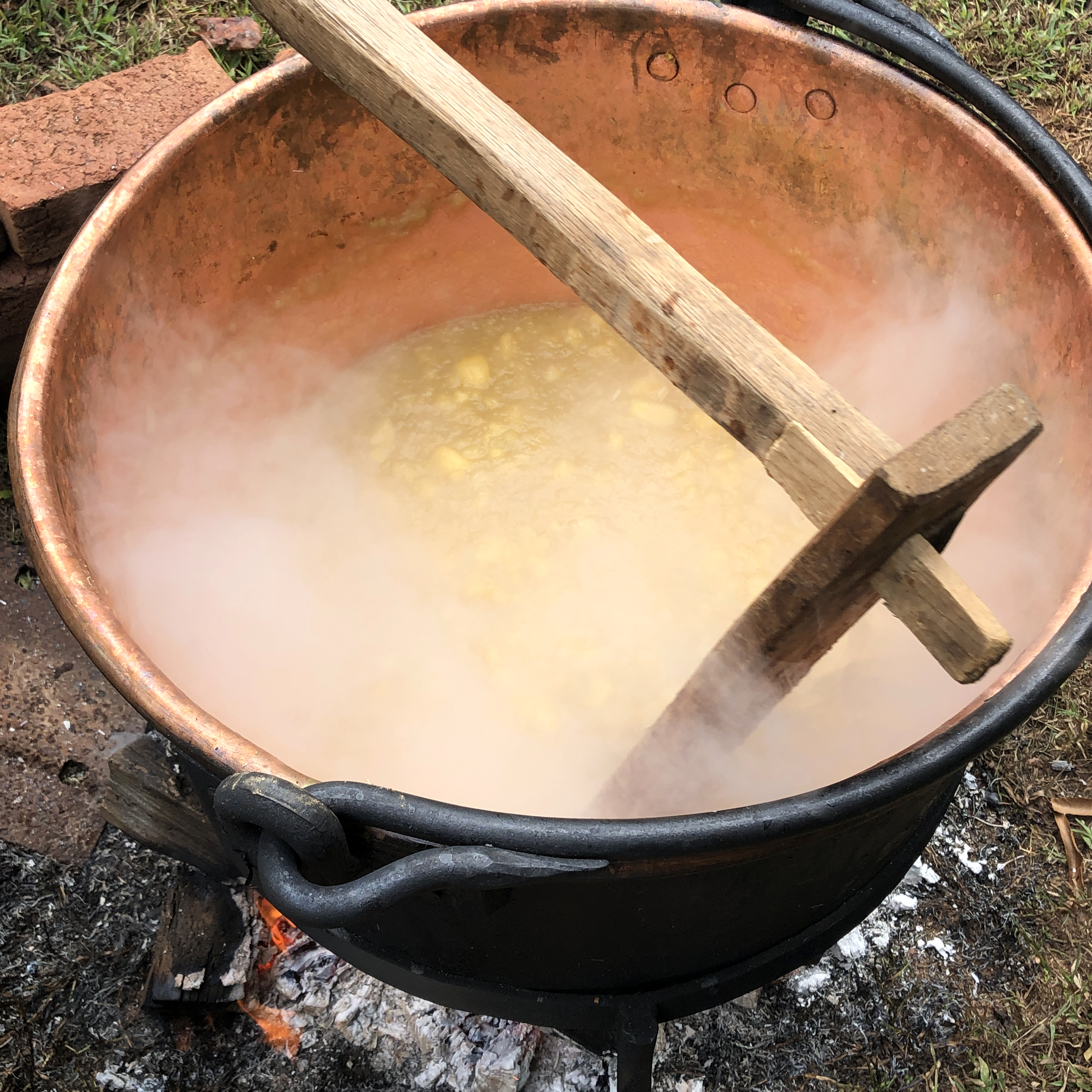 as clean and bright as possible, before you put the cider into it, and you must not suffer the butter to remain in it a minute longer than is actually necessary to prepare it, or it will imbibe a copperish taste, that will render it not only unpleasant, but really unhealthy. It is best to prepare it late in the fall, when the apples are quite mellow. Select those that have a fine flavor, and will cook tender; pare and quarter them from the cores, and boil them in the cider till perfectly soft, having plenty of cider to cover them well. If you wish to make it on a small scale, do not remove the apples from the cider when they get soft, but continue to boil them gently in it, until the apples and cider form a thick smooth marmalade, which you must stir almost constantly towards the last.  A few minutes before you take it from the fire, flavor it highly with cinnamon, nutmeg, ginger, and cloves, and when the seasonings are well  intermixed, put it up in jars, tie folded paper over them and keep them in a  cool place. If made in the proper manner, it will keep good more than a year, and will be found very convenient, being always in readiness.

Many people who are in the habit of making apple butter, take it from the fire before it is boiled near enough. Both to keep it well, and taste well, it should be boiled long after the apples have become soft, and towards the last, simmered over coals till it gets almost thick enough to slice. If you wish to make it on a large scale, after you have boiled the first kettle full of apples soft, remove them from the cider, draining them with a perforated ladle, that the cider may fall again to the kettle, and put them in a clean tub. Fill up the kettle with fresh apples, having them pared and sliced from the cores, and having ready a kettle of boiling cider, that is reduced to half its original quantity; fill up the kettle of apples with it as often as is necessary. When you have boiled in this manner as may apples as you wish, put the whole of them in a large kettle, or kettles, with the cider, and simmer it over a bed of coals till it is so thick, that it is with some difficulty you can stir it; it should be stirred almost constantly, with a wooden spaddle, or paddle, or it will be certain to scorch at the bottom or sides of the kettle. Shortly before you take it from the fire, season it as before directed, and then put it up in jars.

Apple Butter at its Most Basic

Pare, core, and slice apples. (Since Horne Creek Farm slices our apples the night before our special events, we put the sliced apples in water with some lemon juice added to prevent them from turning brown. When you are ready to begin, drain the water and lemon juice off of the apples). Set aside.  Bring 1 ½ - 2 gallons of cider to a boil in a copper kettle over an open fire. Determine how much cider to put in by looking at the apples -- if they are very juicy to start with, start with 1 ½ gallons of cider. If they seem a little “dry," start with 2 gallons of cider.  Add apples and pennies. Continue boiling. Stir constantly with the wooden apple butter paddle for 5 – 7 hours until thick. Sugar, cinnamon, and other spices (such as nutmeg, cloves, allspice) may be added to taste.

Remember to remove pennies from pot before serving!!!

Historical Notes: Apple butter “frolics” were major social events. In spite of the chores involved, the assemblage had relatively little to do so they told stories, gossiped, sang, and otherwise enjoyed fellowship. Courting couples were given special attention, often given the job of stirring. At some frolics, if the couple stirring bumped the kettle and splashed the butter, they had to kiss each other. Copper pennies were placed in the apple butter kettle to scrape the bottom of the kettle and prevent the apple butter from burning.  When the butter is finished and poured in the crocks, the person who gets the penny from the kettle should not spend it, because it is a good luck token.

The most popular stirring technique was to move the paddle twice around the sides and then across the middle. The old rhyme reminds the stirrers:

“Twice around the side/ And once down the middle / That’s the way to stir/ The apple-butter kittle.”

If the fire wood touches the kettle the butter will burn. Oak makes the best fire for a butter boiling because it gives a steady heat without throwing much flame.

If you turn the crock upside down, without a lid, and the mixture stays in the container without running out or dripping, it is “real” apple butter. (If it pours out, it is “jelly” butter.)