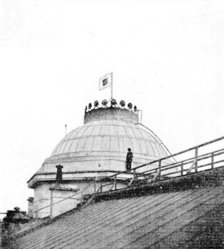 North Carolina's Civil War and Reconstruction experience officially began and ended here. When Abraham Lincoln issued a call for troops in April 1861, North Carolina's governor, John Ellis, responded, "You can get no troops from North Carolina". On May 20, a special convention met in the Commons Hall and adopted an "Ordinance of Secession," celebrated with a 100-round artillery salute.

Following Ellis' untimely death in 1861, Speaker of the Senate Henry Toole Clark took over as governor and served the remainder of Ellis' term. In 1862, Zebulon Baird Vance was elected governor and led state government from his office until April 12, 1865. For a time, the capitol also served as a supply depot---the only southern capitol known to have served such a purpose. Ladies of the town met in the rotunda to manufacture uniforms, haversacks, and bandages. Confederate troops encamped and trained around Raleigh, before being sent to the front lines. Captured Union regimental flags hung from the legislative balconies.

On April 12, 1865, Vance's emissaries, former governors David L. Swain and William A. Graham, surrendered the capitol and the city of Raleigh to Gen. William T. Sherman. His 75,000 Union forces encountered brief resistance as they entered the city on April 13. Upon entering the State Capitol, troops found captured Union regimental flags hanging from the balconies and coastal lighthouse lenses stored on the floor of the rotunda. They ransacked the building and one Ohio soldier even stole the State's 1789 copy of the U. S. Bill of Rights. Signal Corps Lieutenant George Carr Round established a signal station atop the dome on April 14, after nearly losing his life the previous evening when he accidentally jumped onto and partially through the rotunda's skylight. In the treasurer's office that morning, Gen. John A. Logan established the Society of the Army of the Tennessee, one of the first organizations for Union army veterans. Twelve days later, on the evening of April 26, following Gen. Joseph E. Johnston's surrender at the Bennett Place, Lieutenant Round used colorful signal rockets to send what was perhaps one of the last signal messages of the war, "Peace on Earth. Good Will to Men." Sherman's army departed in early May.

Following the war, Pres. Andrew Johnson moved to rebuild the South on his own terms. He appointed Republican William W. Holden as provisional governor of North Carolina. Holden headed the state's new Republican Party, which included freedmen, carpetbaggers (northerners who moved south during Reconstruction to take advantage of political and financial opportunity), and native whites (sometimes called "Scalawags" by their peers who were loyal to the Democratic Party). In 1865, Governor Holden called a state convention at the Capitol to draft a new state constitution. To bring North Carolina back into the Union, the convention first had to vote to abolish slavery and annul the secession ordinance. The constitution that came out of the convention differed only slightly from the 1776 constitution and was not approved by voters.

In 1868, Congress called for the state to hold a second convention to once again draft a new constitution to present to the electorate. This time, the constitution expanded voting rights, guaranteeing universal male suffrage and giving people the power to elect state and county officials. It was ratified by popular vote of 93,086 to 74,016 in April 1868. Later that year, North Carolinians elected African American men to the General Assembly for the first time. Over the next thirty years, twenty-five won seats in the state Senate and nearly one hundred in the House of Representatives.

African American legislators' influence in North Carolina law remains significant. They supported more funding for public education, biracial charitable institutions, and a statewide railroad system. As conservative opposition to the Republican Party grew, their rivals resorted to intimidation and violence to frighten voters from the polls. With the end of Reconstruction in 1877, conservatives Democrats began chipping away at the laws granting African Americans rights. By 1900, black North Carolinians lost the right to vote in general elections thus greatly diminishing the likelihood of an African American winning a seat in the legislature.