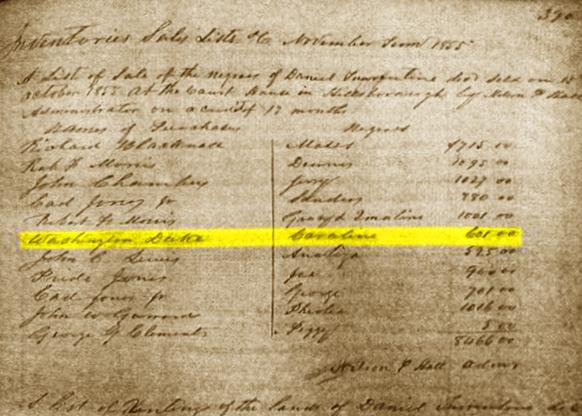 In the next installment of our #TrueInclusion campaign, we are sharing information about Caroline, a young enslaved girl purchased in 1855 by Washington Duke. Her purchase record is pictured here.
From this record, we know that she was separated from her mother and sister (Gracy and Emiline, listed above Caroline on the document, were sold to someone else). Life on a small farm with a family like the Dukes most likely meant working alongside the person who enslaved her, both in the home and in the fields. Caroline was around 11 years old when she was brought to live at Duke Homestead, and she likely spent several years enslaved by the Duke family.
On the 1860 Slave Schedule of the U.S. Census, Washington Duke does not appear as an enslaver, so he may have sold Caroline by that time. However, Duke's name does not appear on the 1860 Agricultural Census, so it is possible that census workers simply failed to record him that year. When Washington Duke died in 1905, he left property to his housekeeper, an African American woman named Caroline Barnes. It is likely that this Caroline Barnes is the same Caroline that Washington Duke had enslaved decades earlier because her marriage certificate lists her mother as Gracy. 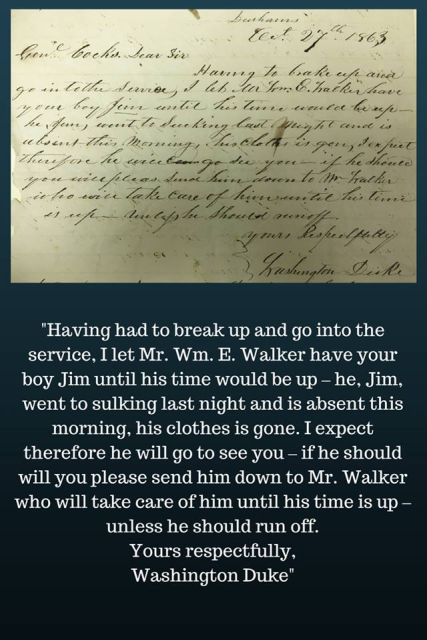 As we continue to share the stories of African Americans associated with Duke Homestead, we wanted to share more information about James. Born into enslavement in Kinston, North Carolina between 1826 and 1835, James’ first enslaver was James Cox, who later deeded him, along with 29 other enslaved persons, to his son. Called Jim during his enslavement, James spent his childhood and adolescence on the Cox plantation, mostly doing agricultural labor. While enslaved by Cox, James' labor was hired out to numerous Lenoir and Orange County farmers between 1860 and 1865, including Washington Duke.
In the North Carolina Piedmont, yeoman farmers exploited enslaved persons by participating in the “hiring out” of enslaved labor. Enslavers leased enslaved persons to individuals who paid the cost of the contract directly to the enslaver. James received no payment and had no choice in where he was contracted. Hiring out, which garnered huge profits for enslavers, also perpetuated isolation and destabilized familial bonds. Despite this, James actively found ways to resist his enslavers, intentionally slowing his work and causing damage to tools and crops.
In early 1863, James was hired out to Washington Duke, where he was most likely forced to engage in agricultural labor in Duke’s crop fields. In June of 1863, James attempted to seek his freedom from Duke alongside a man named Green, Green’s wife Lear, and Lear’s child, who were enslaved by other men. James' attempt for self-emancipation was unsuccessful, and he was either captured or returned to Duke on his own. By October of the same year, James again sought to self-emancipate after Duke entered the Confederate Navy. James either returned to Cox, or was sent to labor for William Walker, to whom Duke transferred James' contract.
After Emancipation in 1865, James continued to live and labor on the land of William Lunsford, to whom he was previously leased out. Based on Freedman’s Marriage records in 1866, it was at this time that James lists his name as James Cox instead of Jim, and married his wife, Martha. James spent the rest of his life in the Orange County area working as a farm laborer, most likely a tobacco sharecropper, until his death circa 1885.