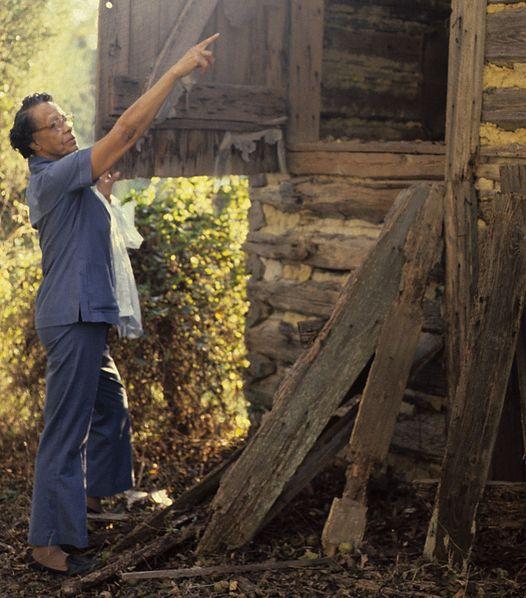 Betty Belle Holman Hayes was a descendant of the Holman family, whose ancestors were enslaved by the Bennehan-Cameron family and became sharecroppers after emancipation. Stagville sharecroppers were bound in a restrictive contract and paid with a share of their own crop. If you've visited Stagville, you've toured the Holman House, one of their family homes.

In a 1986 interview, Betty Belle Holman Hayes discussed the complicated origins of her name: Her mother named her Belle Holman after Isabelle Cameron, the daughter of the white landowner. Isabelle Cameron wanted the child named after her and brought toys and clothing to the Holmans.

Betty Belle's grandfather wanted to name her in memory of his wife, Betty. While her birth certificate states her name as Belle Holman, she was called Betty Belle to appease both her grandfather and the white landowning family.

In the decades following emancipation, families like the Holmans endured an unfair sharecropping system that was deepened by societal racism. Betty Belle's name story is a striking example of how sharecroppers navigated power inequalities and oppression.

Pictured is Betty Belle Holman Hayes during an interview at Horton Grove likely taken in the 1980s.

Historic Stagville continues to center the African American experience highlighting African American families from Stagville who had places named for them in Durham and Raleigh. In this post, we'll examine Latta Park in Raleigh's Oberlin Village, named for the formerly enslaved Reverend Morgan L. Latta.
Morgan London Latta was born into slavery on the Camerons' plantations. He was 12 when slavery ended. Latta struggled to support his mother and thirteen siblings during sharecropping and Reconstruction. He valued education above all and attended school as a child when he was able to find time. After saving enough money, he was eventually able to attend Shaw University.
Latta went on to be a teacher, returning to Cameron land to teach the children of sharecroppers. In an effort to improve the lives of African Americans, Latta founded Latta University in Raleigh, NC. Latta University primarily educated freedmen and orphans from 1892-1920. Rev. Latta built his family home next to the campus. Unfortunately, a fire destroyed the house in 2007.
Latta Park, a new city park, will be opening in the near future at Latta Home and University site, a testament to Morgan Latta’s lasting impact on Oberlin and Raleigh. Latta recounts much of his life and the operations of Latta University in his autobiography The History of My Life and Work, Autobiography by Rev. M. L. Latta, A.M., D.D. 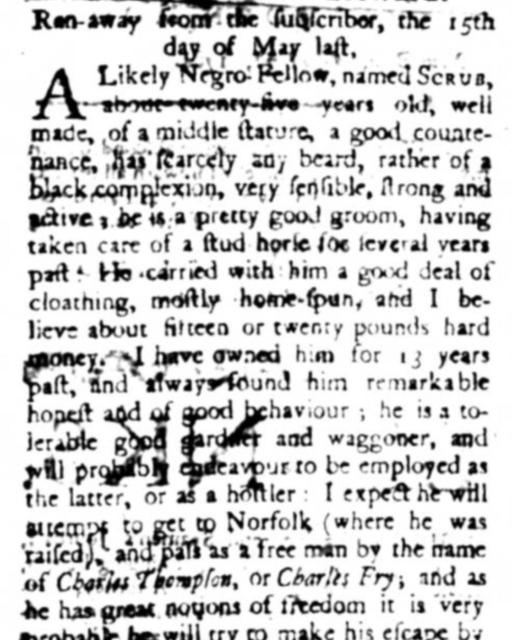 An enslaved man called Scrub fled Stagville to gain freedom in 1784. Richard Bennehan mounted a campaign to apprehend him, offering a reward for Scrub’s capture and return.

Richard Bennehan placed an advert that gives insight into Scrubs experience and his journey to freedom. It states, “I expect he will attempt to get to Norfolk (where he was raised), and pass as a free man by the name of Charles Thompson, or Charles Fry.” How did Bennehan know these names? Had Scrub used these pseudonyms before?

Based on the archival record, it seems that Scrub was never captured and returned to Stagville. Unfortunately, researchers have not been able to trace Scrub’s life as a free person, likely due to his name change. While Richard Bennehan believed he may have called himself Charles Thompson or Charles Fry, Scrub could have chosen a different name in order to evade his pursuers. Changing his name was one way Scrub ensured and protected his life as a freeperson.

Pictured is the 1784 advert placed by Richard Bennehan for the capture and return of Scrub. 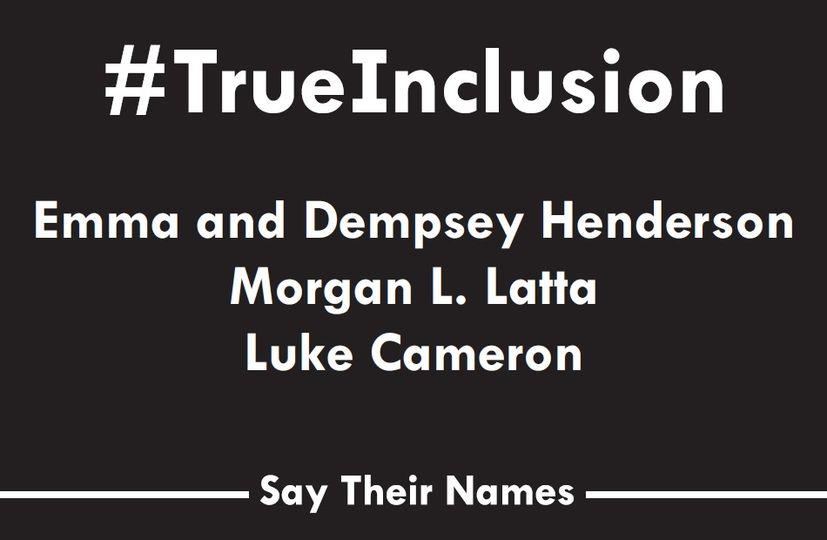 Historic Stagville continues to center the African American experience. Although we can call many names of African Americans associated with Stagville, today we have chosen three of those to highlight. All three of these people have powerful stories to tell. 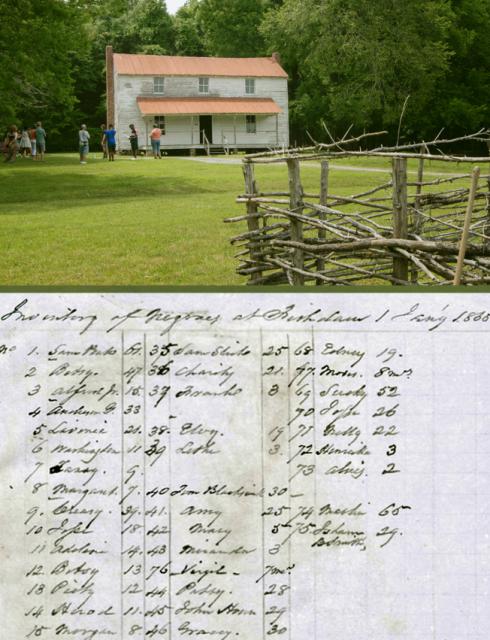 When the Civil War ended in 1865, over 330,000 people were finally emancipated across North Carolina. Over 1,000 enslaved people were freed on the Cameron plantations.
Here, freed people rejoiced. Amid their celebrations, they faced together the uncertainty of the future. Morgan Latta, a young boy who experienced emancipation here, recalled that people “woke up at midnight praying out that their prayers might answered. Husbands prayed that they might see their wives again, and the wives prayed that they might see their husbands again, and the children prayed that they might see their parents again, and also their sisters and brothers. They prayed several days and nights because they had been delivered.”
Latta’s quote reminds us of the hopes and demands of freed people, as they prayed that the damages of slavery might be repaired at emancipation. This Juneteenth, we remember the hopes of everyone who struggled for freedom here, from 1776 through 1865, and beyond.
Pictured is an 1865 list of people, including Morgan Latta, who were emancipated from the Fish Dam section of the Cameron plantations. 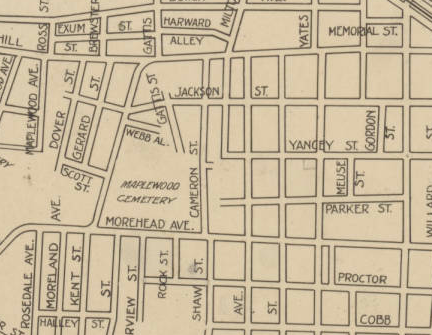 Like many freed people after emancipation, Luke Cameron and his wife Silva Banks fought to establish themselves and finally obtain control and autonomy over their lives. While landownership was a great triumph for freed people, they were often sold portions of land that were undesirable due to racism and discrimination. These lands were prone to flooding and erosion.

Luke Cameron and his brother-in-law, Abner Banks, purchased land adjacent to Morehead Avenue. The street was named Cameron Street after Luke Cameron and his family who settled there in the late 1860s. Soon after Cameron purchased the land, the Maplewood Cemetery was established by the city which subjected Cameron street to water runoff and constant flooding.

Lawyer, writer and activist, Pauli Murray, grew up on Cameron Street with their grandparents and aunts. In their book Proud Shoes: The Story of an American Family, they recall looking over the neighborhood they called ‘the bottoms’ from their grandparents house on a hill, “life flowed gustily through the Bottoms and there was a continual uproar of shouting children, barking dogs, bellowing cows, and people hollering back and forth across the low ground, but we were never a part of it.” (page 30)

Pictured is a 1925 Durham Map, Cameron Street labeled next to Maplewood Cemetery 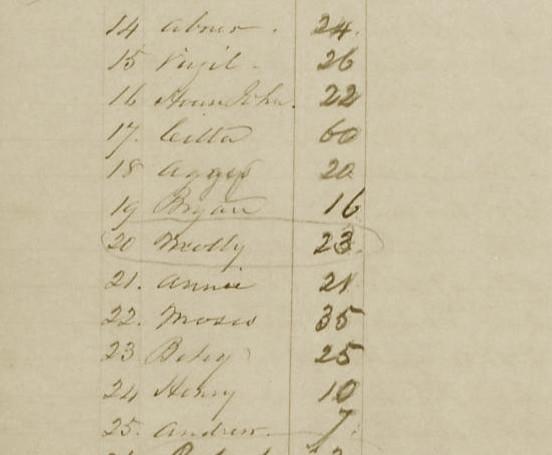 As we continue to say the names of African Americans associated with Historic Stagville, we wanted to share more about Agnes Walker.

Officially, slaveowners and overseers did not always permit enslaved mothers to name their own children. In these cases, enslaved mothers may have given the child a beloved nickname or "basket name." When official naming was allowed, mothers were strategic in their choices. Through naming enslaved women exhibited some agency in affirming lineage and ancestry. Within many enslaved families at Stagville, first names often repeated through generations. Without written records, passing on names was one way that enslaved families held their family history in living memory. The Walker family is one family who passed down names.

Agnes, often shortened to Aggy, was one of the first enslaved children born on the Bennehan plantation in 1781. At age 14, Aggy was likely a victim of sexual violence. Although archival records do not tell us the father of her child, we do know that Aggy gave birth to a daughter, whom she named Priscilla, in October of 1796.

On August 18, 1818, Priscilla had her own daughter, Mary Walker. In the late 1830s, Mary welcomed her second child and only daughter, whom she named Agnes after her grandmother. Mary may have hoped her daughter would embody characteristics she admired from her grandmother. Both Mary and her daughter Agnes experienced freedom, realizing all the hopes that Aggy and other enslaved mothers before them could only imagine.