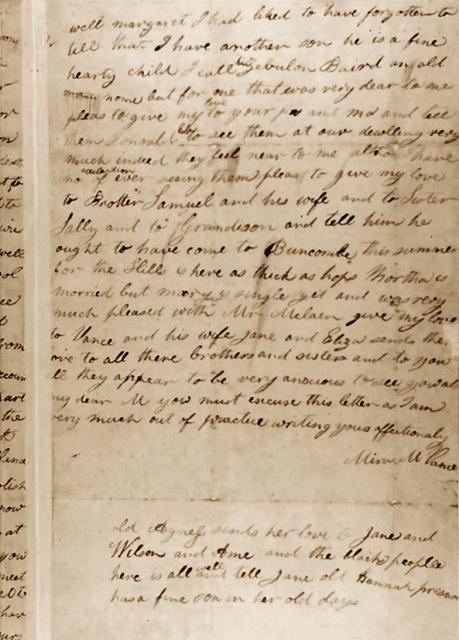 In the next installment of our #TrueInclusion campaign, we wanted to share more information about Aggy (d. 1837) and her husband Richard (d. before 1835), who were enslaved by the Vances. Over the next few weeks, we will be bringing you more information about this couple and their experiences in the Reems Creek Valley.
Aggy and Richard were born in Virginia. They most likely accompanied the Vances in their migration into the Blue Ridge Mountains as two of the three enslaved people listed in David Sr.’s 1790 census record in present-day Buncombe County. We know the names of three of Richard and Aggy’s children: Hudson, Ann, and Richard (II). The couple likely had other children; one record suggests that they had at least three more sons.
Look for our next installment of True Inclusion to learn more about Richard and Aggy’s lives in the Reems Creek Valley.
Photo of the ca. 1790s slave dwelling at the Vance Birthplace. 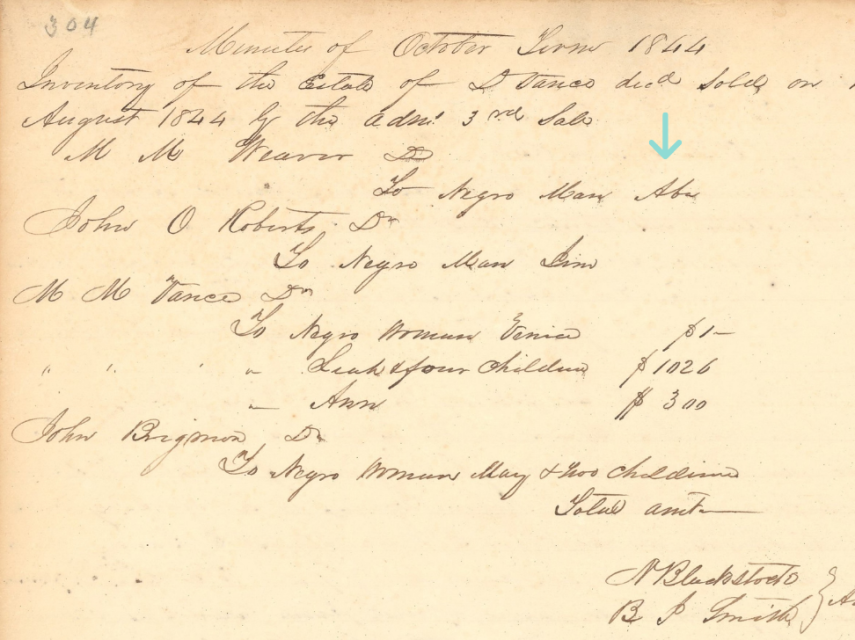 Abram was born ca. 1799. After David Vance Sr.’s 1813 death, Abram was willed to David Vance Jr. Abram most likely remained on the Reems Creek plantation before moving to Lapland to work at the Vances’ stock stand in the 1830s. Since there are no records of Abram’s sale or death before 1844, we believe he is the Abe listed in David Jr.’s 1844 estate sale. At the auction, Abe was purchased by Montraville Weaver, who lived in the Reems Creek Valley. We have not discovered what happened to Abe after 1844, but he might be the Abraham Vance listed as living in Reems Creek Township in the 1870 census. Abraham lived in Hudson Vance’s household, right next door to Richard Vance. We do not know Abraham’s relationship to Hudson and Richard, but this record tells us that the three men found each other after emancipation and maintained a close bond. 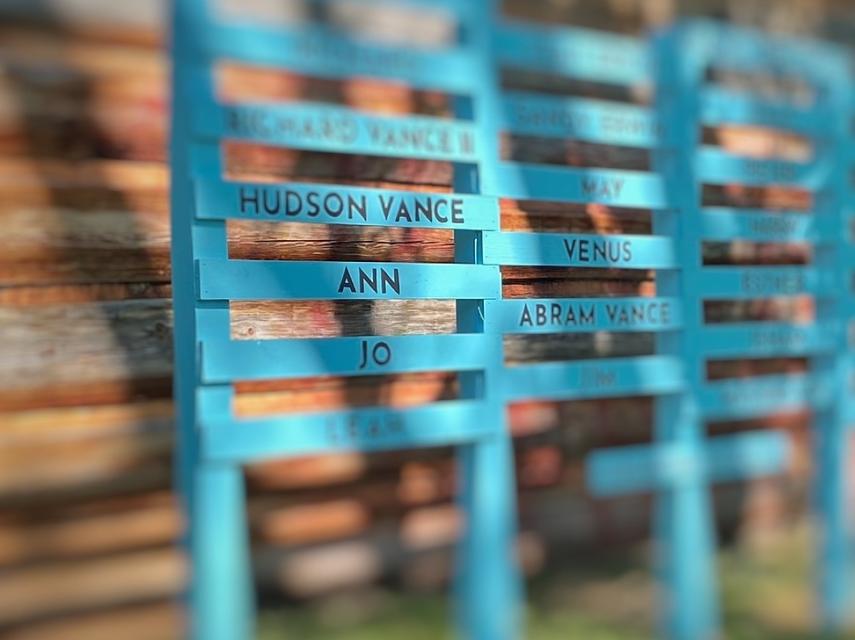 In this installment of our #TrueInclusion campaign, we want to share more information about Ann.
One of the three known children of Richard and Aggy, Ann was born around 1815. She had at least two brothers, Hudson and Richard Vance. Along with Hudson, Ann is mentioned in Priscilla Vance’s 1835 will, which stipulated that both siblings not be sold until after their mother’s death. Hudson was sold after Aggy’s death; however, Ann remained enslaved by David Vance Jr.
Ann was living and laboring at the Vances’ stock stand in Lapland (present-day Marshall) when David Jr. died in 1844. Because Ann and 11 other enslaved men, women, and children were considered David Vance’s property, they were put up for auction to cover their enslaver’s debts. When Ann ascended the auction block, Mira Vance (David’s widow) was the highest bidder. Ann accompanied Leah, Venus, and four enslaved children to the Vances’ new household in Asheville. There are no known records mentioning Ann after 1844, although she is likely one of the women listed in the 1850 and 1860 Slave Schedules for Mira Vance. If she was living in 1865, Ann would have been about 50 years old when she was finally freed from bondage. 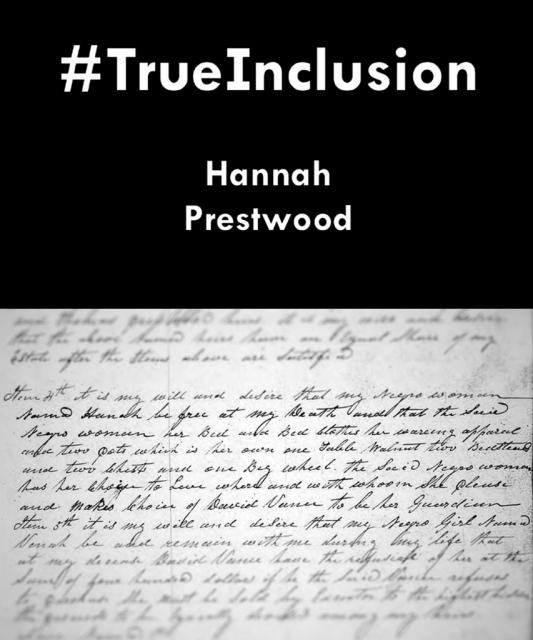 In this installment of our #TrueInclusion campaign, we want to share more information about Hannah Prestwood.
As we have shared in previous posts, in 1830, an enslaved woman named Aggy communicated a message to Jane, who was likely a relative. Aggy used her enslaver Mira Vance’s correspondence to relatives in Tennessee to share that “Hannah Prestwood has a fine son in her old days.” But who was Hannah Prestwood and what was her connection to Aggy and Jane?
An 1838 will gives us some answers and hints at other facts about Hannah Prestwood’s life. In this will, enslaver Jonathan Prestwood stated, “I desire that my negro Hannah to be free at my death.” However, without additional petitions and documentation, Hannah Prestwood would not be legally free upon her enslaver’s death. Manumission laws (the laws allowing enslaved people to be freed by their enslavers) in North Carolina were incredibly strict, requiring enslavers to receive permission from the county court to free an enslaved person, and then post a large bond, which was raised to $1,000 in 1831. The courts would only grant freedom for “meritorious service,” and the freed person had to leave the state within 90 days. The 1830 modifications to the law provided an exception: men and women over the age of 50 could remain in the state after manumission and their enslavers only had to pay $500.
Though we believe Hannah Prestwood was over 50 in 1838, we have not discovered whether her enslaver followed through on the manumission process. His will does state that Hannah chose David Vance Jr. as her “guardian,” which likely meant that Vance handled the petitions (if any were made) on Hannah’s behalf. It is equally likely that Prestwood did not intend to pay the fee and so Hannah’s freedom was not legal. Without legal manumission, Hannah could be forced to remain in slavery by her new “guardian.” We have not discovered any documents that illuminate Hannah’s life after 1838, although we continue to conduct research.
We will share more about Hannah Prestwood’s life and her connection to Aggy and Jane in our next #TrueInclusion Post.
Image: Scan of Jonathan Prestwood’s 1838 will (Ancestry.com). 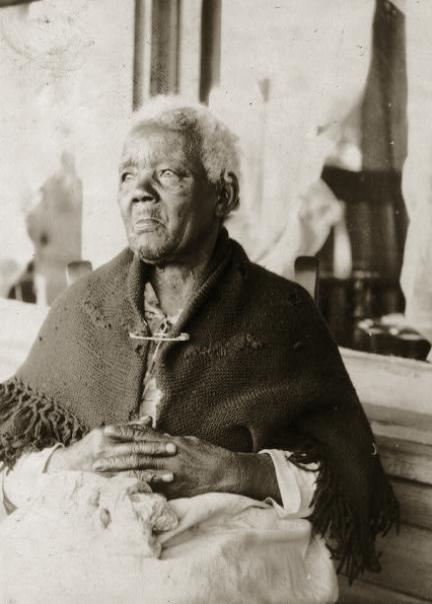 In this installment of our #TrueInclusion campaign, we want to share more information about Sarah Gudger. In our previous post, we shared Sarah’s experience when her mother, Lucy McDaniel, died in 1862. She recounted the emotional time in a WPA narrative in 1937. Her narrative also delves into the kinds of labor Sarah was forced to do while enslaved, as well as her feelings toward her enslavers.
Sarah summarized her experience of slavery through the visceral feelings of being cold, hungry, and tired. She did not sleep in a bed until after emancipation, nor could she choose what she ate, when she slept, or how long she worked each day. Sarah lived on a plantation owned by the Hemphills for the first 50 years of her life. She remembered working in all weather until she felt like her back would “surely break.” She also recalled the lashings that she and other enslaved people received if they did anything William Hemphill “didn’t like.” In addition to working hard all day, Sarah typically did not have very much to eat, just cornbread and molasses. However, at night she would wait until everyone was sleeping and set out for her aunt’s house two miles from the Hemphill plantation. There, Sarah’s aunt would feed her hot corn pone with salted meat and a drink of milk.
Because the woman interviewing Sarah was interested in her memories during slavery, rather than her experiences after emancipation, Sarah does not share much about the second half of her life. Sarah did recall the moment William Hemphill told her she and the other enslaved people laboring on his plantation were free. She also shares that she went to live with her father, Smart Gudger, until his death in 1890. At the time Sarah was interviewed, she lived with distant relatives on Dalton Street in South Asheville. The home was in an African American neighborhood just north of Kenilworth, a planned development initially constructed in 1914. She died one year after sharing her story with the WPA interviewer. Her narrative is the only first-person account of enslavement in Buncombe County and helps us understand what life was like for many enslaved people living on plantations in western North Carolina.
Listen to an audio reenactment of Sarah's story, produced for the Forever Free: Slave Deeds of Buncombe County exhibit in 2013: https://youtu.be/yoIreNPkReM
#WomensHistoryMonth
Photo of Sarah Gudger in 1937.