The apple orchard at Horne Creek Farm, established in 1997, is the only state-supported orchard in the nation dedicated to the preservation of old apple varieties of southern origin.  Situated on a five-acre field, the orchard supports 850 trees: two each of 425 different varieties. 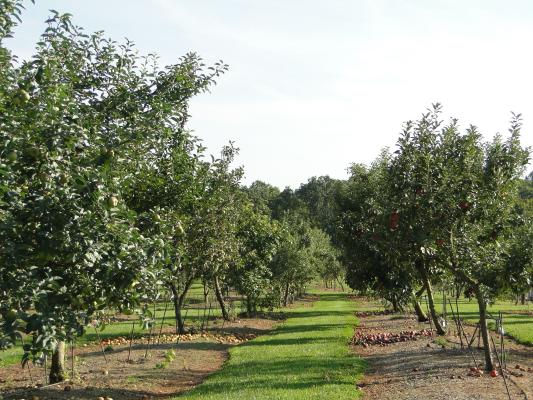 The orchard received its first two hundred trees in 1999.  Over the next three years site staff and volunteers planted six hundred additional trees.  Since that time, fifty more trees have been added. There are two trees of each apple variety in the orchard.  One tree is a free standing semi-dwarf which grows to a maximum height of twelve to sixteen feet.  These trees typically live up to fifty years. The other tree is an espaliered dwarf variety.  These smaller trees typically live up to thirty years.  Visit the apple index for a full listing of varieties in the orchard.

Why was Horne Creek Farm Selected as the Location for the Southern Heritage Apple Orchard?

Apples are part of North Carolina's rich agricultural heritage, so a preservation orchard fell perfectly into the mission of Horne Creek Living Historical Farm. Located in Surry County, North Carolina, adjacent to the Yadkin River section of Pilot Mountain State Park, the state historic site was in the process of restoring a farm once owned by Thomas and Charlotte Hauser to its 1900-1913 appearance. The North Carolina Division of State Historic Sites was led in this project by three primary guiding tenants: the state would restore the site buildings to their early 20th-century appearance, the site would raise livestock representative of breeds of that era, and staff would grow heirloom varieties of fruits, vegetables, and field crops.

While farmers in 1900 were certainly not growing hundreds of varieties of apples on their individual farms - typically three to six, at most - the chance to help save hundreds of varieties of old southern apples from the brink of extinction and reintroduce them to the public was an important and exciting project to undertake. And so, the journey began.