The story of Appalachian apple orchards, past and present, could fill volumes, but it’s just one chapter in the global story of a very special 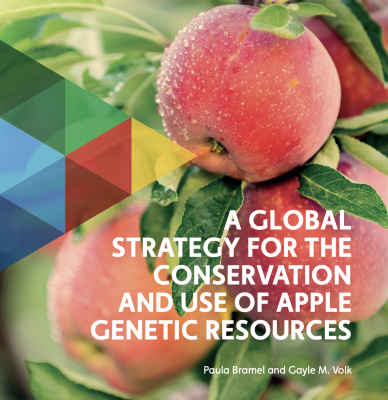 temperate fruit tree. Species of the genus Malus are native to forests spanning the Northern Hemisphere, and the domesticated species has gained attributes from several wild Asian and European progenitors since cultivated apples were first carried out of the Tien Shan Mountains of Central Asia millennia ago. Much later, migrants planted seed apples in gardens and kitchen orchards across North America, giving rise to a rich secondary center of diversity.

A synthesis of the apple tree’s global story, from its distant past to possible future, was the Crop Trust’s first step towards creating the Global Strategy for the Conservation and Use of Apple Genetic Resources. The latest in a series of conservation strategies we have been developing in collaboration with partners from the global conservation and use community since 2006. The apple strategy was developed jointly with Gayle Volk, a researcher from the USDA-ARS in Fort Collins, with input from more than 60 key genebanks curators and researchers in North America, Europe, New Zealand, China, Japan, Russia, and Kazakhstan. It brings together a review of the crop’s ancient and modern history, a survey of the status of major collections, extensive expert consultations and visits to key sites to sketch out a framework for securing the remaining diversity of apples.

The survey shows that the sort of work Veteto is doing at the Appalachian Institute – keeping a collection of apple trees alive to prevent unique local varieties being lost to history – is being replicated all over the world by a diverse group of dedicated people. Apple collections are variously held by public institutions, universities, private companies, botanical gardens, foundations, public parks and passionate individuals. Local and independent conservation efforts stand alongside bigger national collections, such as those of the United States Department of Agriculture. The Genesys online catalog of genebank collections lists data on more than 44,000 Malus samples in 91 institutions – representing only the best-documented of what is certainly a much larger number of collections.

Horne Creek is proud to be assisting with this project. Click these links for more information from the Global Crop Diversity Trust:

Orchards, Cold Cider and the Global Strategy for Apple →