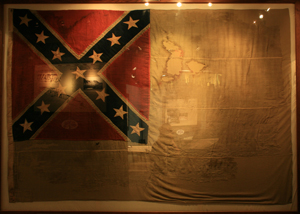 When Confederate soldiers hastily evacuated Fort Anderson during the early morning hours of February 19, 1865, one of the fort's garrison flags fell off a wagon and was picked up by a soldier in the 140th Indiana Infantry. The soldier gave the flag to the 140th's commanding officer, Col. Thomas Brady. The flag was then presented by the 140th to Indiana Gov. Oliver P. Morton in a ceremony at the National Hotel in Washington, D.C. on March 17, 1865. In attendance at the ceremony was President Abraham Lincoln. The president was supposed to attend a play at Campbell Hospital just outside of D.C. at the same time, but decided he would rather attend the flag presentation because Governor Morton was a personal and political friend of his. Unbeknownst to Lincoln, John Wilkes Booth had learned of the president's itinerary for the day and planned to kidnap Lincoln on his way to the play.

When Lincoln did not show up, Booth returned to his room, which just happened to be at the National Hotel! As Booth approached, he saw the president on the balcony standing over the Fort Anderson garrison flag. When Lincoln left, he passed by Booth outside the hotel. Witnesses later testified that the look on Booth's face was "demonical". His kidnapping scheme had been foiled because Lincoln's plans had changed.

Ironically, this change of plans actually put Lincoln squarely in Booth's path. Historians are divided about how this incident affected Booth's plot. Some argue that the kidnapping scheme was nothing more than a ruse to capture Lincoln and kill him; others believe that because of this incident Booth abandoned his kidnapping scheme in favor of assassination.