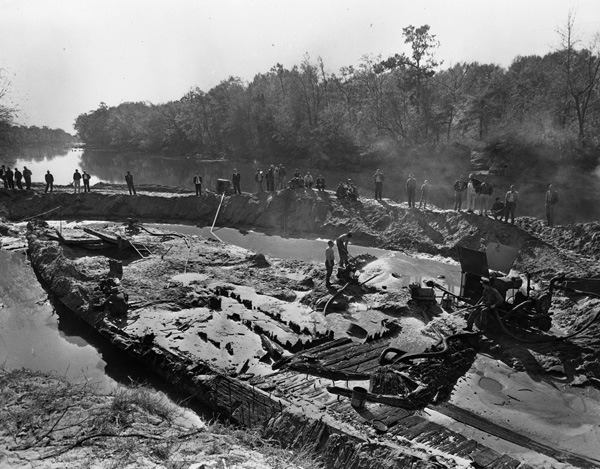 The CSS Neuse was one of 26 ironclads commissioned by the Confederate navy. Having a wide, flat bottom, the vessel resembled a river barge. When completed, the twin-screw steamer was plated with iron armor and measured 158 feet long and 34 feet wide. Delays in construction, low water, and lack of ground support prevented the gunboat from entering combat outside of Kinston. When Union troops occupied Kinston in March 1865, the Neuse was burned by its crew, resulting in a large explosion in her port bow, which sank the vessel.

The muddy waters of the Neuse River preserved the gunboat for nearly 100 years. Private efforts to recover the ship began in 1961; but poor weather, lack of funds, and ownership controversies prevented the ship from being raised until 1963. A year later the hull was transported nearly 5 miles to the Caswell Memorial site at 2612 West Vernon Avenue.

Amazingly, nearly 15,000 artifacts were recovered from the ship. The Neuse collection, one of the largest for a Confederate naval vessel, provides valuable insight into 19th-century shipbuilding and naval warfare.

On June 23, 2012, the Neuse hull was moved in three sections from the West Vernon Avenue location, and reassembled at the fully-enclosed CSS Neuse Civil War Interpretive Center at 100 North Queen Street. The Center opened to the public on July 18, 2013, with temporary exhibits.The grand opening for the site was on March 15, 2015, with first first floor exhibits dedicated to the history of the CSS Neuse. In December 2016, the Homefront Exhibit opened on the mezzanine, telling the story of life in Lenoir County during the Civil War. Plans are currently in place to construct Phase III, Wartime Kinston.