In 1830, Joseph Bonner bought the same lots that John Lawson had long ago chosen for his own, and sometime before his son Joseph Young Bonner was born a decade later, this prosperous merchant in naval stores built his house. The "front" land on Water Street, known as Town Point, soon came to be called Bonner's Point. The view must have appealed to Joseph and his wife, Sallie Ann, as much as it had to the Lawsons, for they planned a wide front porch where one could sit and rock on a summer evening, watch the fishing boats come in, and chat with neighbors walking by. Its back porch overlooked the garden, and within its picket fence stood a separate kitchen, a necessary house, a well house, and an arbor where the Bonners planted scuppernong grapes. Their house was spacious, as it needed to be for five children, and even had a "horning room" on the first floor, handy for a nursing mother and baby or entertaining an important guest.

In the newest architectural style, this bedroom and the dining room were in a separate wing with an attic above for storage, and first floor rooms had a shed roof in back where they extended beyond the second story. Extremely fashionable, too, were its unshuttered windows, downstairs mantels handcarved in Adamesque style, and wallpaper-bordered hall. In a lavish touch borrowed from even more sophisticated houses of the day, the Bonner home also featured grain-painted doors and finger-painted baseboards upstairs.

With 35 slaves and 3,000 acres of farmland, the Bonners had a need for many woven goods, and possessed a means for producing them. Joseph Bonner's sheep provided wool, and Sallie Ann had a splendid loom and spinning wheels in the loft above the kitchen. Their farms produced corn, oats, and even rice. Their livestock also included beef cattle, milk cows, and hogs.

As he grew older, Bonner apparently gave up his business in naval stores to manage the farm. "Joseph Y" — as the youngest came to sign himself to avoid confusion with his father — chose the life of a waterman, in tune with the rhythm of tide and seasons like generations of fishermen on the Pamlico.

His sister Caroline, at age 21, married a highly eligible bachelor and agricultural reformer Dr. John F. Tompkins in 1846, and moved into a neat two story clapboard house at the southeast corner of Water and Craven Streets. Dr. Tompkins went on to a distinguished career as publisher of the Farmer's Journal and founder of the North Carolina State Agricultural Society and the State Fair.

During the Civil War, two of Joseph Bonner's sons — William and Thomas — served as surgeons in the Confederate army; as did the Reverend Israel Harding, rector of St. Thomas Parish and namesake of a Revolutionary War veteran. There were scores of others. With "Little Washington" occupied by Federal troops for two long years, Bath was almost isolated by the river blockade, the opposing lines being drawn up only a few miles from town. By 1865, even the burning issues of states' rights and slavery grew colder; and hearts cried out, both south and north, for peace and a return to reason instead of bloodshed. 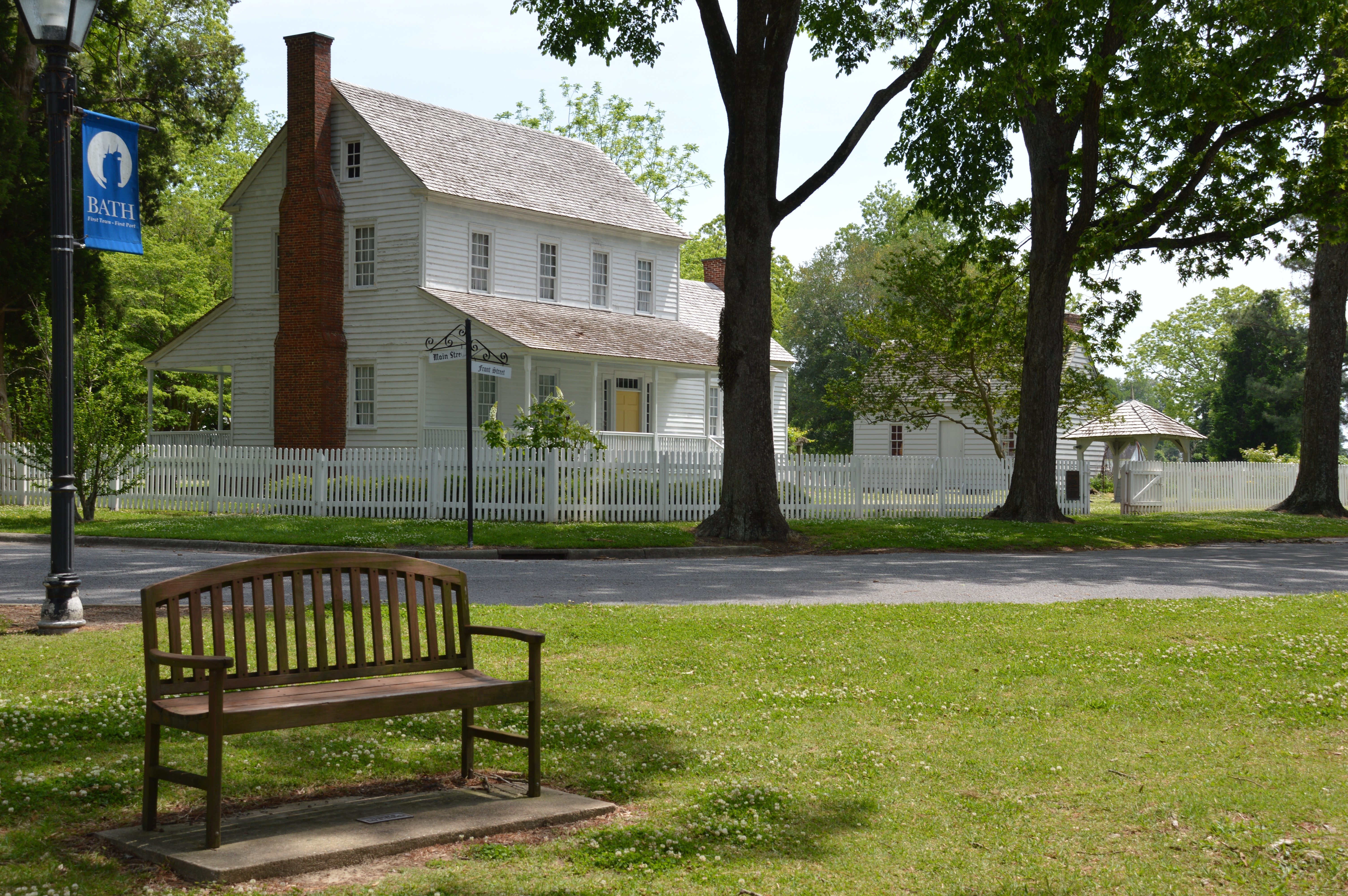 The Bonner House — nestled among elm, walnut, cedar, and dogwood trees — is one of the best remaining examples of early nineteenth-century Carolina architecture.

The house retains many of its original features, including the small blown-glass window panes; wide-board pine floors; and delicate hand-carved mantels. Decorative paint treatments of the period — such as wood graining on interior doors and "marbelizing" on baseboards — are evident throughout the house.

Several names, etched long ago by the Bonner children, remain visible on one of the front window panes.