"Everything Needed for Salvation" 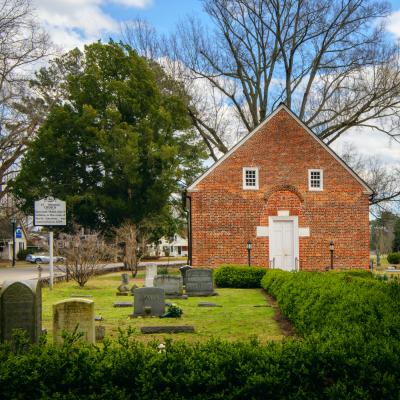 Even before Bath Town was incorporated, "St. Thomas parish in Pamplico" had a jewel in its crown envied by folks in the older Albemarle — a truly princely library of 1,050 books and pamphlets. Dr. Thomas Bray, founder of the Society for the Propagation of the Gospel in Foreign Parts (S.P.G.), purchased it in London with funds subscribed to supply libraries and missionaries in the colonies. It may have been entrusted to the care of Christopher Gale in 1700 at his plantation, Kirby Grange, on Adams Creek. Here the books were a source for worship services observed by the Reverend Benjamin Dennis in 1711. "At Major Gale's . . . the people met each Sunday, where a young gentleman, a lawyer [possibly Gale's brother, Edmond] was appointed to read prayers and a sermon, they having no minister."

Dr. Bray had selected the library carefully so that an isolated clergyman would be able "to instruct his People in all things necessary to Salvation," which to him demanded that it be a wellspring of learning in all fields. In addition to religious works, he included volumes on geography, biography, sports, medicine, poetry, and classical literature. For years it provided Bath's only tangible link with the established church except for brief periods when a minister came and soon left the little town where only a few devout souls noticed either his arrival or departure.

When the Reverend John Garzia, from the borough church in Norfolk, Virginia, agreed to be their rector in 1734, it was cause for rejoicing by the wardens and vestry (or at least part of them)! Work began at last on building a brick church on the lot next to the courthouse that John Lawson had surveyed. Worshipers were not as numerous, nor as dedicated Anglicans, as Garzia might have hoped. He told the S.P.G. his chief problem was with "twelve vestrymen whose only endeavor is to hinder." The last subject his congregation wanted to hear about from the pulpit was sin, inasmuch as many of them practiced these sins more devoutly than churchmanship, according to their rector. In spite of this, construction of the church proceeded, with walls two feet thick, with brick laid in Flemish bond, and with square red paving tiles embellished with designs of flowers and dragons.

Meanwhile this clergyman of Spanish origin who could "scarce speak English," and whose salary went unpaid for four years, baptized 635 persons in St. Thomas Parish in one year alone. A special favorite of the Bishop of London, Garzia also brought the parish several lasting and valuable gifts — a silver communion chalice from the bishop and two silver candelabra, said to have been presented by King George II when the church was consecrated about 1740. In addition, a handsome bell, cast in 1732, was purchased for the church through Queen Anne's Bounty, a perpetual fund created by her royal charter to augment the income of poorer parishes. In November 1744, while visiting a sick member of his congregation, Garzia was killed in a fall from his horse. Soon the vestry was appealing to the S.P.G. for a new priest, but no doubt recalling the penniless Garzia's treatment, they were many years in responding.

A decade later, by a stroke of amazing good fortune, the Reverend Alexander Stewart, with his wife and two sons, traveled up the post road to Bath to be their minister. A member of the Royal Stuart clan of Scotland, Stewart had a master's degree from the University of Dublin. The 30-year-old clergyman hailed from County Antrim, Ireland, as did the newly appointed governor, Arthur Dobbs, who had asked Stewart to come to Carolina as chaplain to the Dobbs household. Stewart had planned to settle in New Bern, but finding that the vestry of Christ Church there had just employed a minister, he accepted the offer to serve St. Thomas. His career began in sorrow when the port was swept by a yellow fever epidemic that claimed the lives of his entire little family, as well as one of his parishioners, John Peyton Porter. When the bereaved minister called to comfort Porter's widow, Elizabeth, the two found they had more than their grief in common. After sufficient time to satisfy the amenities, they were married. He plunged immediately into completing the unfinished church that had been "under construction" for so long that many worshipers had forgotten that this was not the intended effect. He got work moving again, and soon the final details were completed.

Not long after the Stewarts' daughter, Rosa, was born, the rector of St. Thomas became a widower again, this time with a small baby to rear. He looked for a new wife and found one — a Miss Johnston, said to be a sister of the late Governor Gabriel Johnston. Turning back to the problems of his parish, he found they were numerous. For one, there was a growing number of "dippers," as he called the Baptist sect, and in 1758 he tried to combat their influence by writing a book, The Validity of Infant Baptism, which was printed by James Davis in New Bern. He was likewise upset over the growing number of "New Lights" — a product of the Great Awakening — who substituted revivalism, dramatic conversions, and emotional religious ecstasy for the time-honored ritual of the Book of Common Prayer, an anchor in stormy seas to devout Anglicans but an empty mouthing of phrases to the unchurched or the backsliders. As a last resort, Stewart even tried "dipping" a few converts himself. He also worried over the inroads made by "numerous sectuaries . . . having strollers" (itinerant clergymen.)

One of these "strollers" was Methodist George Whitefield, who personified the Great Awakening in Carolina. He had visited Bath first in 1739 while Garzia was struggling with the faithless in his congregation. The portly Englishman took the old north-south route from Edenton, "the worst roads they had since they began their journey" and that night in Bath heard "the wolves on one side of them howling like a kennel of hounds." In 1747 and again during Stewart's ministry, he returned, hoping the conversion of "North Carolina sinners would be glad news in Heaven." Legend has it that on one occasion a secular celebration was scheduled in town at the same time as Whitefield's previously announced preaching. This so insulted the fiery evangelist that he left Bath at once, shaking its dust from his heels and calling down heaven as his witness that it would never amount to anything but an insignificant village, which the legend-quoters say stunted its growth from that day forward.

The Reverend Stewart must have groaned aloud when he read a letter from the S.P.G. in 1763 suggesting that he open a school for black and Indian children. Didn't he have enough burdens already? His joints continually ached from getting soaked to the skin as he ferried back and forth across the river on pastoral calls, frequently catching cold. He had only one Sunday to preach on the south shore, where there were thirteen chapels to be served for every three in Bath. As usual, duty triumphed over his cantankerous side. Although one schoolmaster in the parish was willing to teach black children, few slave owners had "the Salvation of Negro Souls at heart," he discovered. Apparently only a few classes were ever held, but he was successful in opening a school at the Lake Mattamuskeet reservation for Indian children.

The poor clergyman had lost his third wife, and once again it fell to his lot to console another widow, Sarah Coutanch, whose late husband, Michael, had built the finest house in town on Water Street [the Palmer-Marsh House] and represented Bath for many years in the legislature. Stewart was engaged at this time in duties more physical than spiritual, as the long-awaited construction of St. Thomas's glebe house got underway after he agreed with the vestry to clear and improve 25 acres of the glebe himself, and donate 140 towards furnishing the house. When it was completed on the glebe land southeast of town along Adams Creek, the Reverend Stewart moved in with his fourth bride, the widow Sarah.

Hurricanes, howling in from the Outer Banks, had battered the Pamlico for centuries. In September 1769, coastal residents were alarmed by "a blazing star or planet" that streaked across the night sky in what they took as an omen of disaster. The next day a hurricane struck Bath with such ferocity that a pounding tide rose twelve feet above the previous high water mark, ripping every ship on the waterfront from its moorings and driving them over the banks into town or the woods beyond. As Alexander Stewart dashed from his house to secure the livestock and outbuildings, he was struck by flying debris that injured his legs so severely he never fully regained the use of them. In 1771, complications from his injury recurred, this time fatally. He was survived by his widow and four children, but most of all by the indelible stamp of his unique personality and tireless work on St. Thomas Parish.

Artifacts owned by the church include:

Queen Anne's Bell — 18 years older than the Liberty Bell — was cast in 1750 and recast in 1872.
A slate tablet erected in memory of Col. Robert Palmer's wife, Margaret, who died in Bath in 1765.
A large silver chalice presented to Reverend Garzia by the Bishop of London in 1738.
A silver candelabra, ca. 1740, reputed to have been given by King George II.