Halifax and the Revolution 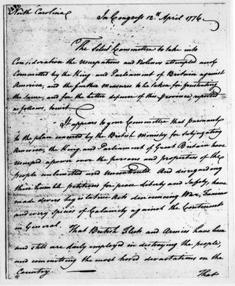 n April 4, 1776, North Carolina’s Fourth Provincial Congress met in Halifax. Samuel Johnston of Edenton, President of the Congress, wrote soon after his arrival in Halifax that “all our people are up for independence.” A committee of seven began investigating “the usurpations and violences . . . by . . . Great Britain against America,” and on April 12, 1776, the group submitted a report then adopted unanimously by the 83 delegates present. Later called the “Halifax Resolves,” the last paragraph of this document read in part: “Resolved, that the delegates for this colony in the Continental Congress be empowered to concur with the delegates of the other Colonies in declaring independency, and forming foreign alliances, reserving to this Colony the sole and exclusive rights of forming a Constitution and laws for this Colony, and of appointing delegates from time to time (under the direction of the general representation thereof), to meet the delegates of the other Colonies for such purposes as shall be hereafter pointed out.” You can read the Halifax Resolves in their entirety here.

The Halifax Resolves were the first official provincial action for independence in any of the colonies. The Fourth Provincial Congress adjourned on May 15, 1776, having appointed a single Council of Safety to rule the entire colony. This council was meeting in Halifax when, on July 22, it received news that the Declaration of Independence had been signed in Philadelphia. The council immediately adopted a resolution declaring North Carolinians “absolved from all Allegiance to the British Crown.”

On August 1, 1776, Cornelius Harnett, a prominent Halifax resident and Revolutionary patriot, was elected to give North Carolina’s first public reading of the Declaration of Independence to the town of Halifax. It had only been a little over three months since the approval of the Halifax Resolves. In November, the Fifth Provincial Congress assembled in Halifax. By December 18, this congress had approved the new state’s first constitution and on December 23, as its last official act, the assembly appointed Richard Caswell as the first governor of the State of North Carolina. This one small town of Halifax saw the adoption for national independence, the first state constitution and the election of the first governor after colonial rule. Clearly Halifax was a front runner for the independence movement in not only North Carolina, but the entire nation as well.

The Town of Halifax became a major supply depot for both the state militia and the Continental Army. In the latter half of 1775, the Provincial Congress established a bureaucracy for the organization of the battalion of minutemen being raised at Halifax and for the effective management of the powder magazine and supply depot already being established there. Troops that had been raised at Halifax and other North Carolina districts were accepted into the Continental Army in May of 1776.

Unfortunately, the Halifax armory was unsatisfactory in its production, apparently because the expense of arms production was greater than they expected, and this greatly slowed down their output and shipping time. The North Carolina General Assembly launched a number of investigations against the Halifax Gun Manufactory, with no greater result than putting someone new in charge of the operations. The situation became even worse when, in early May, 1781, British Colonel Banastre Tarleton led an advance guard of General Cornwallis’s army into Halifax, where he routed a band of local militia.

The main army reached Halifax several days later. Homes were plundered of valuables and the people insulted. At one time the situation was so much out of control that Cornwallis court-martialed and executed a sergeant and a dragoon for outrages against the town and citizens of Halifax for which they had been responsible. During British occupation, the courthouse records of Halifax were packed and hidden in the swamps outside of town.

In early May, 1781, the British army left Halifax, having damaged little except the Public Works, which was soon in operation again. Five months later at Yorktown, Virginia, Lord Cornwallis surrendered to General George Washington. However, the British still were active in South Carolina; and the “Tory War” still raged in North Carolina, so the operations of the storehouse and Public Works continued in Halifax until May, 1783, about one month after the Continental Congress had ratified articles of peace with England.