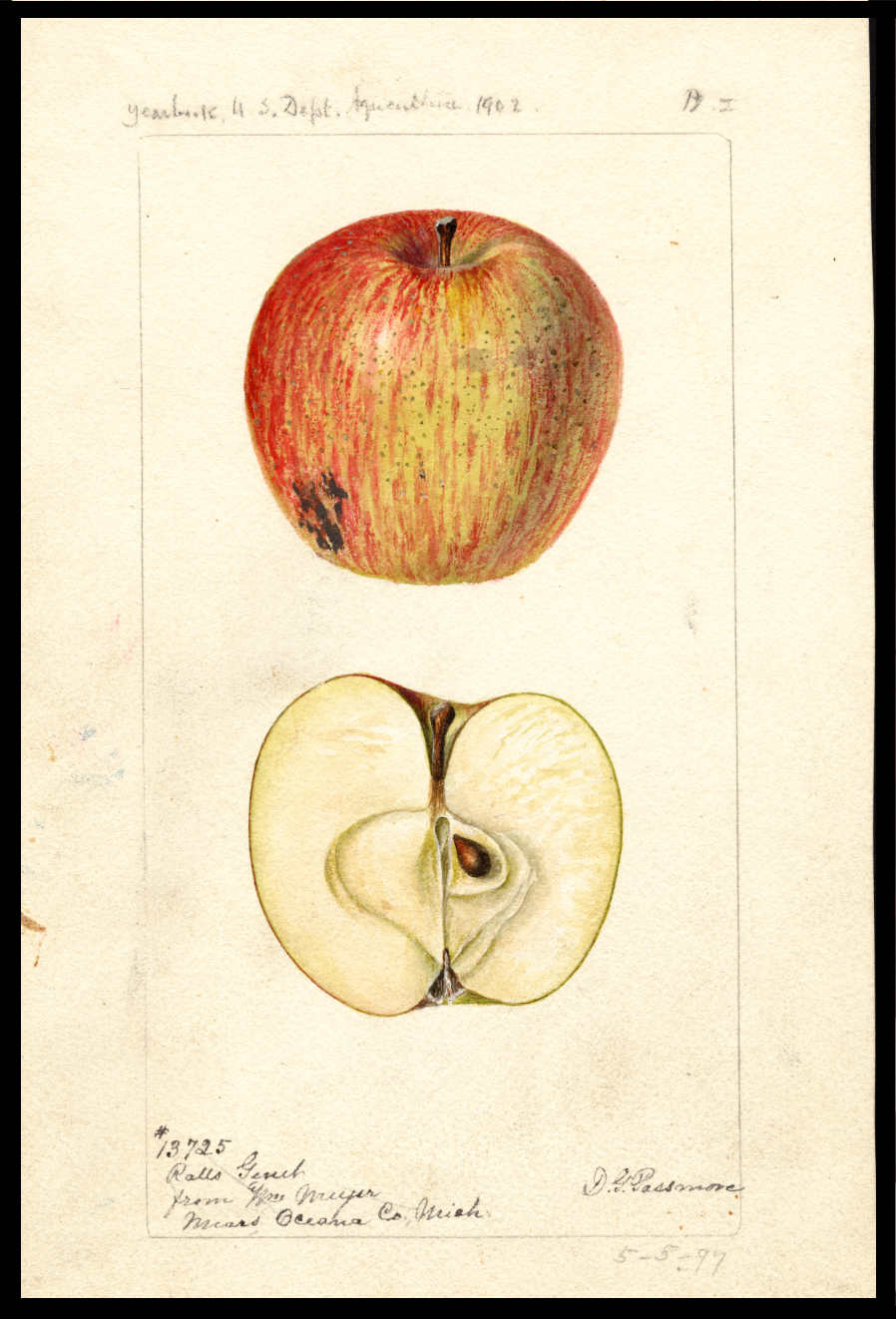 Description: Fruit below to above medium, larger if property thinned, roundish oblate, conical; skin yellow or greenish, blushed and mottled pinkish red and striped with darker red or crimson on the sunny side, often with a light bloom that gives the fruit a dull appearance; dots numerous, small, whitish or russet. Flesh whitish yellow, fine-grained, crisp, juicy, mild subacid. Ripe October and an excellent keeper.

History: This apple first came to notice in this country in the 1790s, being grown by Caleb Ralls (1750-1823) in Amherst County, Virginia. The most conservative and believable theory concerning the origin of Ralls Janet is that it originated as a seedling on the farm of Caleb Ralls or somewhere nearby and was named Janet by him. The name Janet may be a spelling variation on the old English name Jennet or Genit, which originally meant a crossbreed or hybrid. 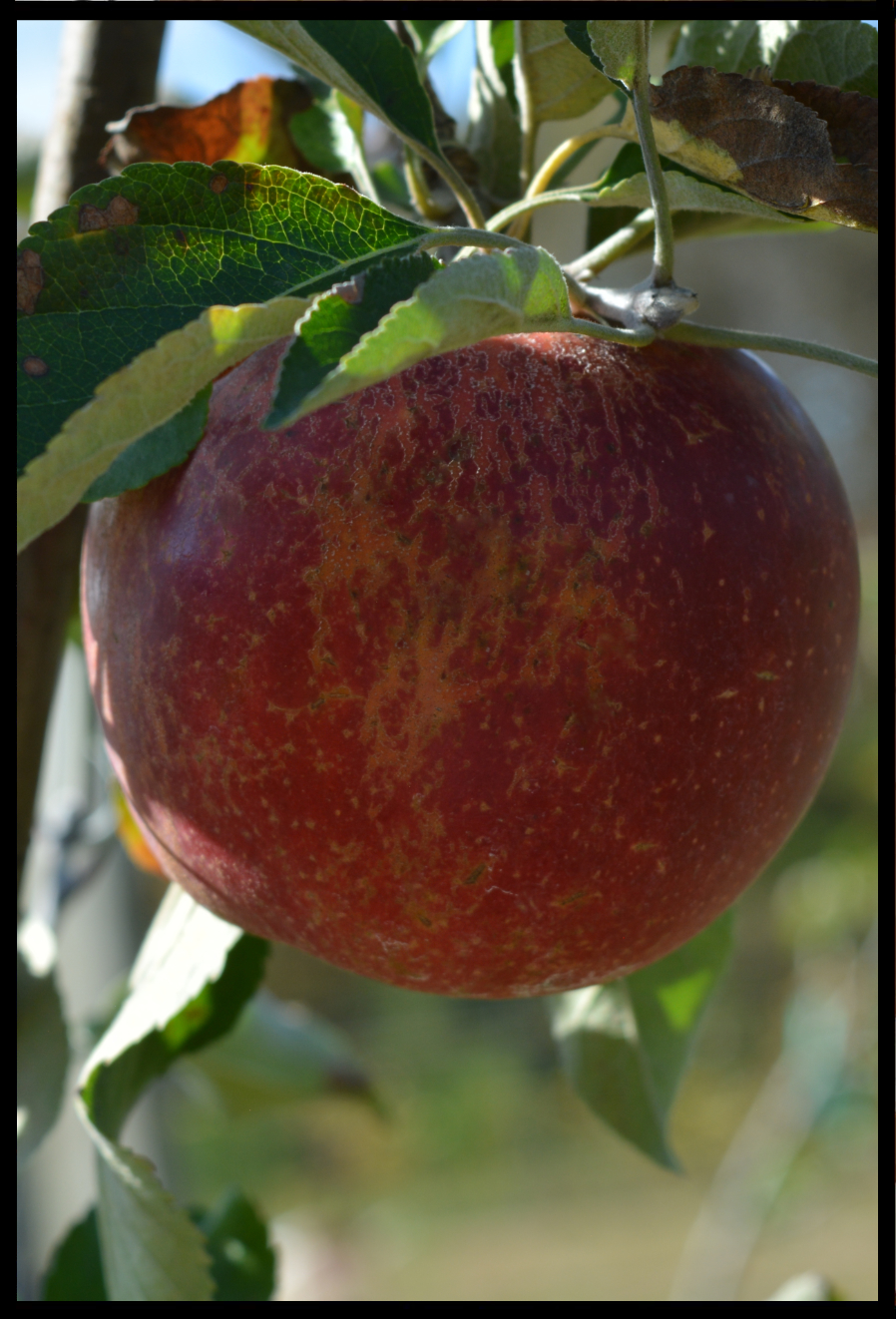 Ramsey Limbertwig is one of the many outstanding Limbertwig apple varieties recently discovered by noted apple hunter, Tom Brown. Very similar in flavor and appearance to Fall Limbertwig. Fruit is large, slightly flattened in shape with dark and light red skin over a greenish base. The yellowish flesh is very firm and crisp and very juicy. Makes outstanding cider. Ripens late October and is a great keeper. 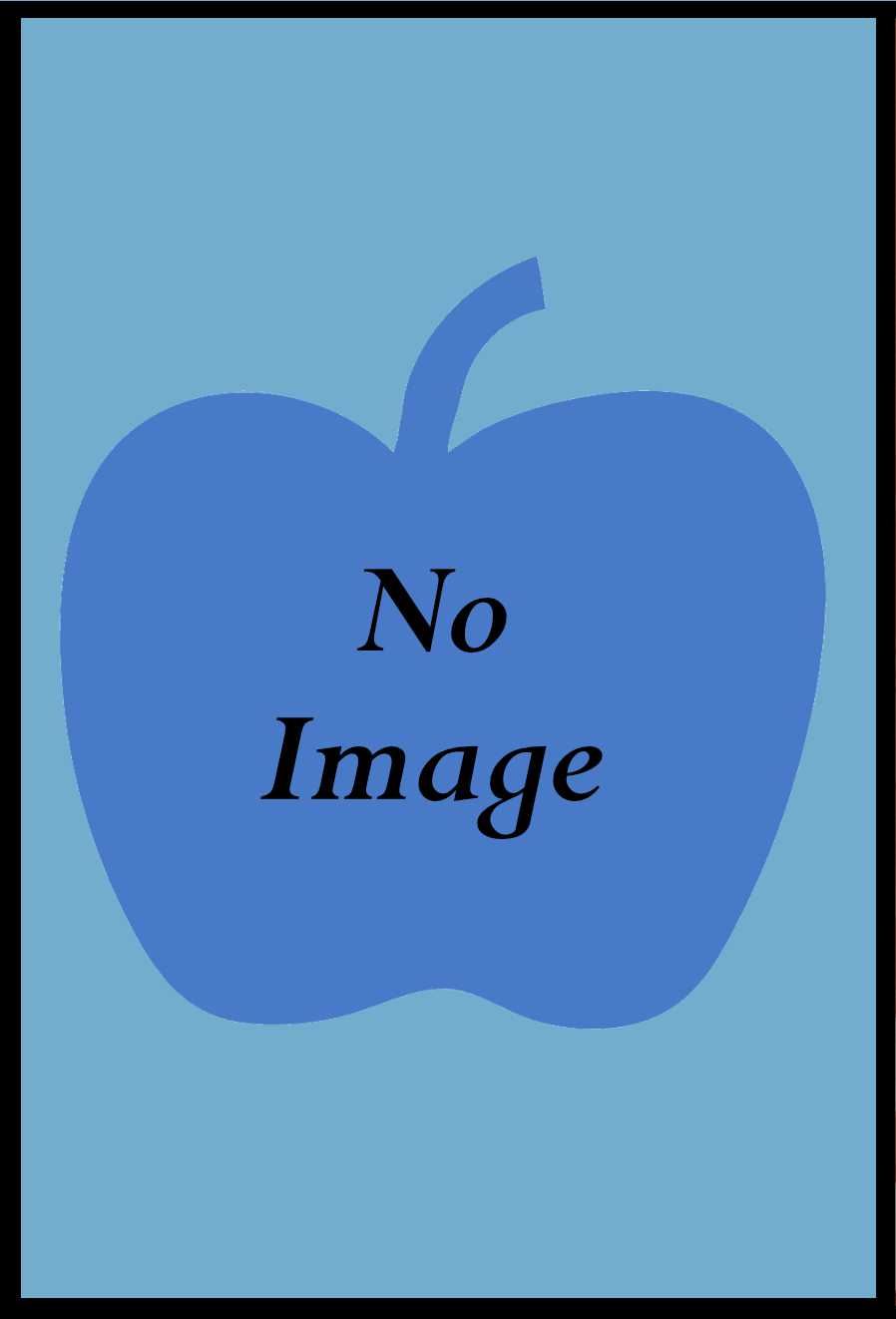 History: From 1869 to 1904 the Franklin Davis Nursery in Richmond listed but did not describe an apple called Hollow Core Pippin, and Downing (1878) describes what is probably this same apple under the name Rattle-Box. 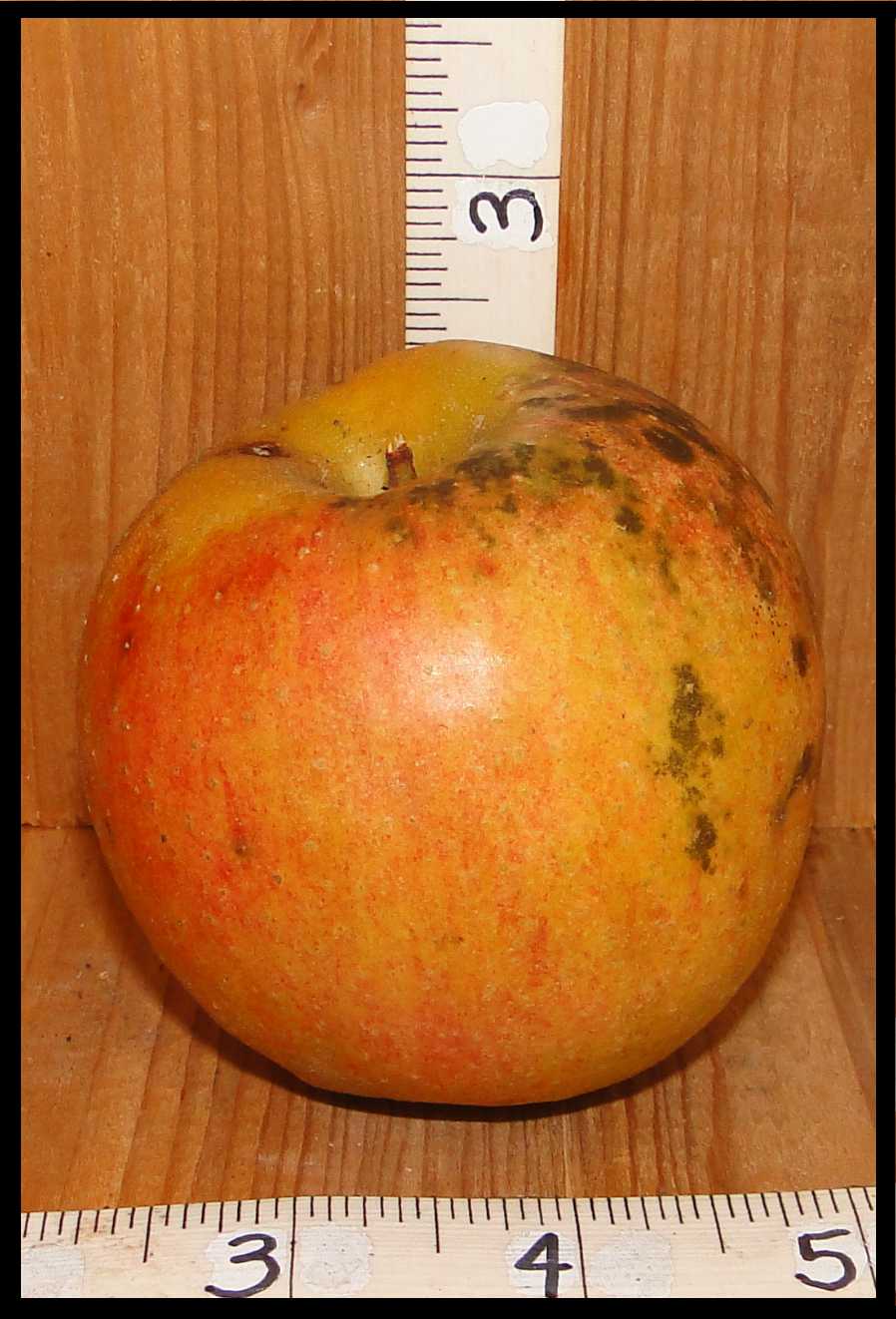 History: Rawley Duncan Stallard (1771-1856) amassed considerable land on the Clinch River in Virginia. An undated newspaper article says: “The home orchard which lasted more years than any other in Scott County was the cluster of trees planted by Rawley Stallard on the farm now owned by William Banner. It is a documented fact that some six or eight apple trees, without any expert care such as pruning or spraying, there grew and bore a bumper crisp for more than one hundred and fifty years.”

History: Another apple from the Dee Moore orchard in Avery County, North Carolina. This tree was collected by Jason Bowen and Doug Hundley. 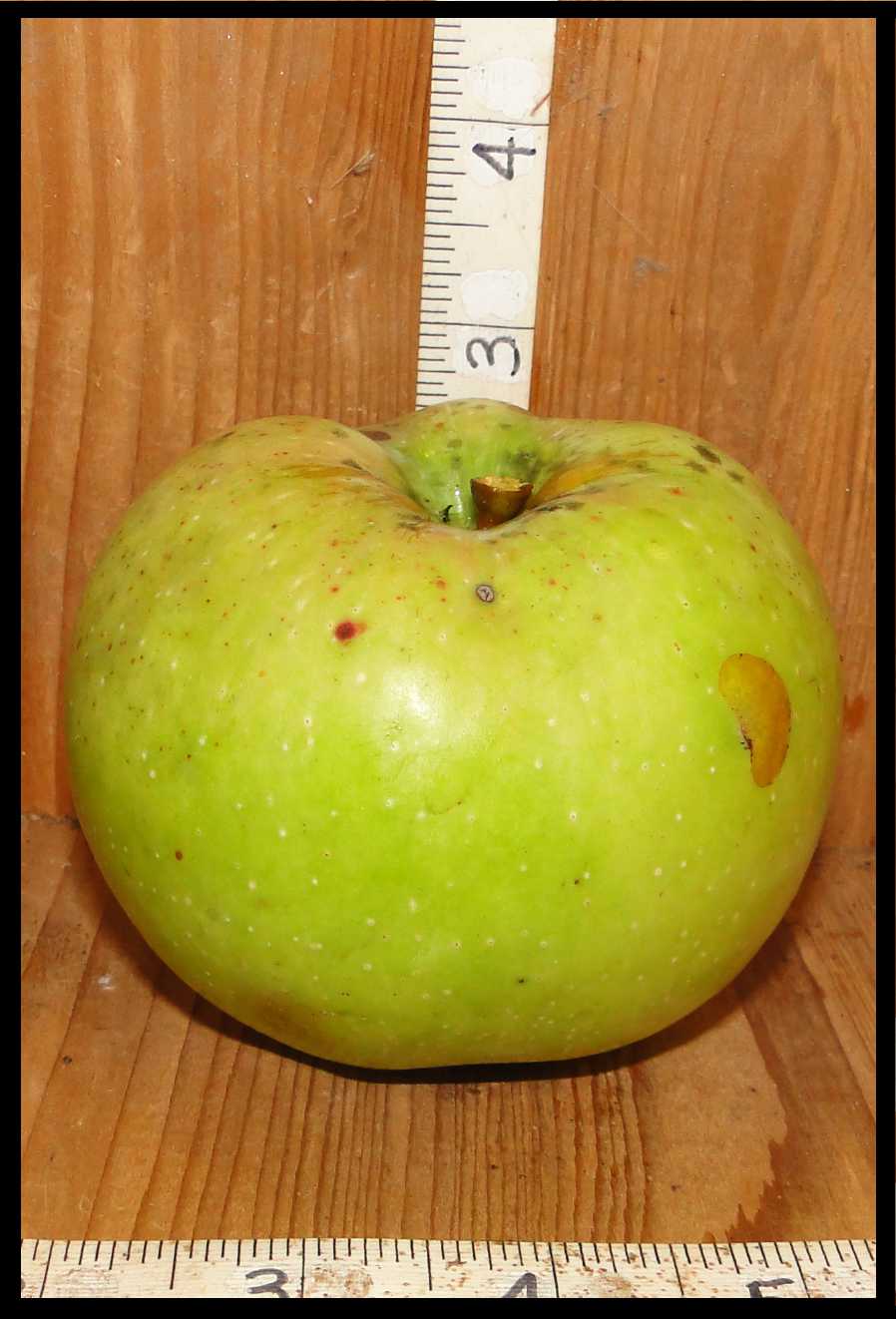 From the 1887 catalog of Silver Leaf Nurseries, Lee County, Virginia; “New. Originated with Peter Reasor, Esq., of this county. Fruit above medium, roundish ovate, green with a faint blush, flavor mild subacid and excellent...November to April.” 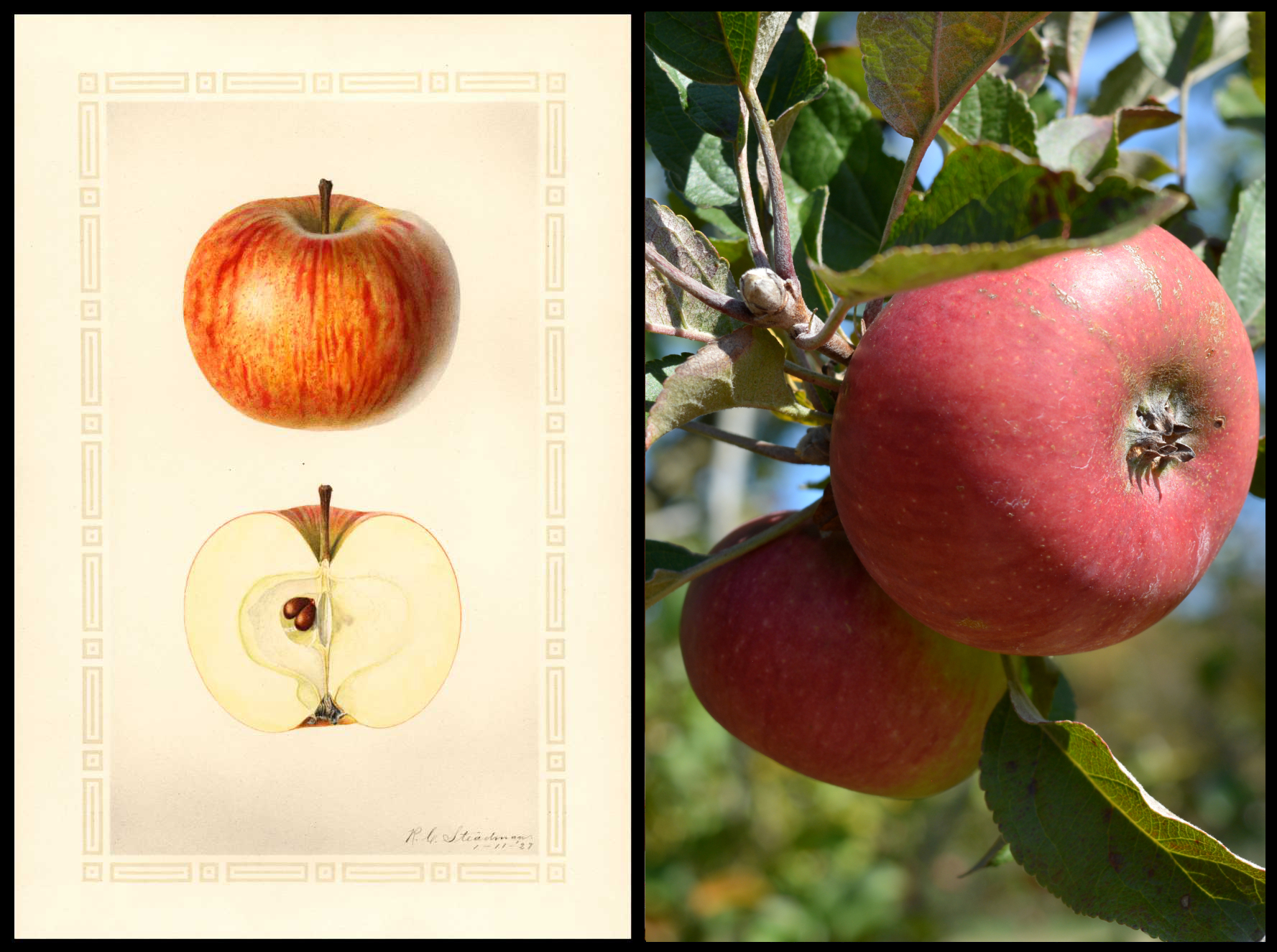 History: Rebel originated about 1850 on the farm of Captain Charles B. Wood of Rappahannock County, Virginia.

History: This popular American apple originated in Russia. It was subsequently grown in Sweden and from there trees were imported into England before 1816. Red Astrachan was one of the first Russian apple varieties to reach America, being received by the Massachusetts Horticultural Society from London in 1835. A mere ten years later it was listed by a nursery in Kentucky.

History: This old German apple was brought to this country before 1880. In Europe, Red Bietigheimer was first described in 1598, where it was known by the name Roter Stettiner. The fruit is notable mostly for its large size and lovely color as its coarse, rather tough flesh makes it mainly a cooking apple. History: A Virginia apple first described in 1853 and listed by Virginia nurseries from 1873 to 1880. Said by Downing (1878) to have been grown extensively in eastern and southwestern Virginia. 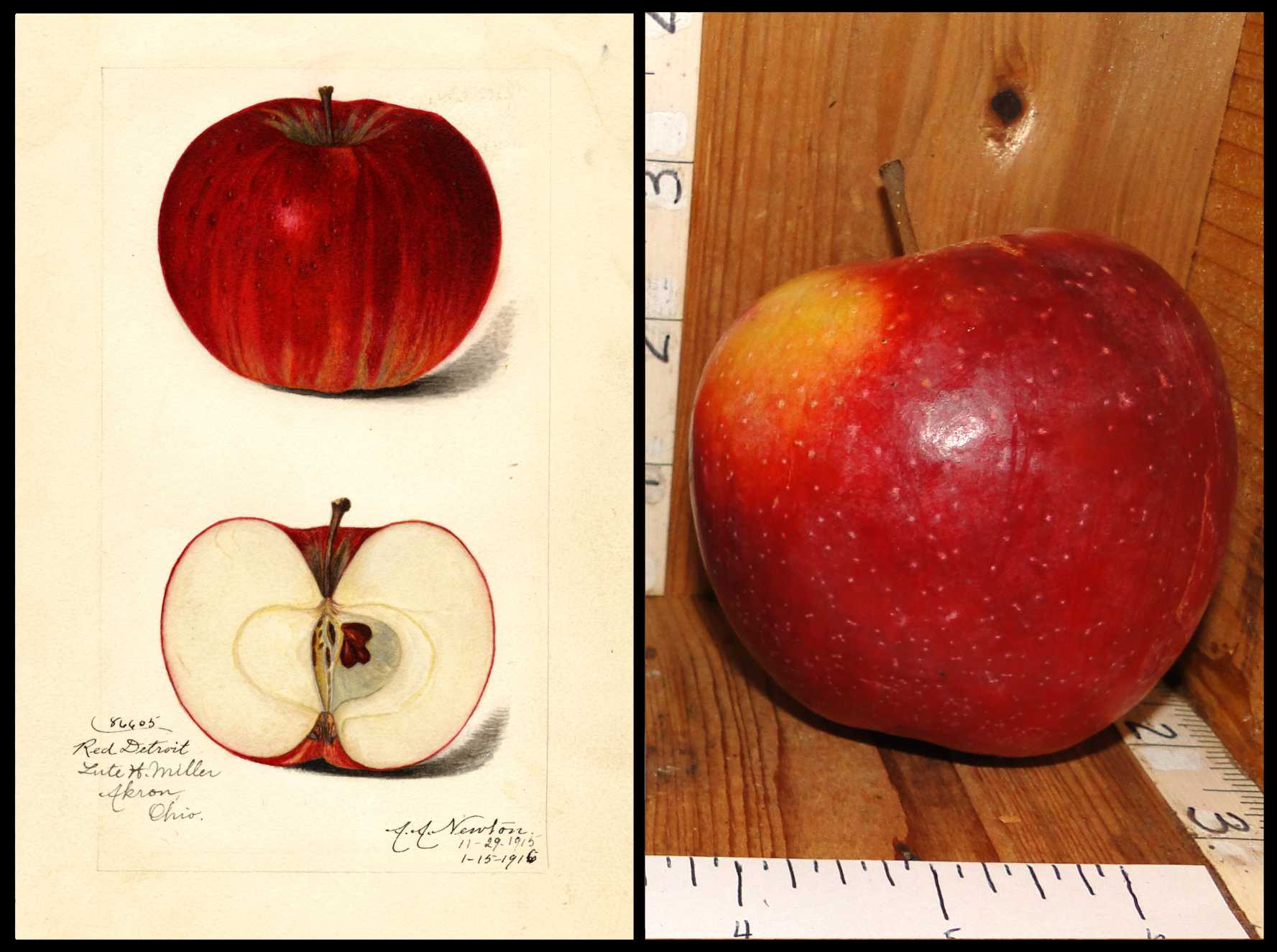 History: The southern apple called Red Detroit is of unknown origin but has been grown for almost a century in north Georgia, especially around the town of Blue Ridge. 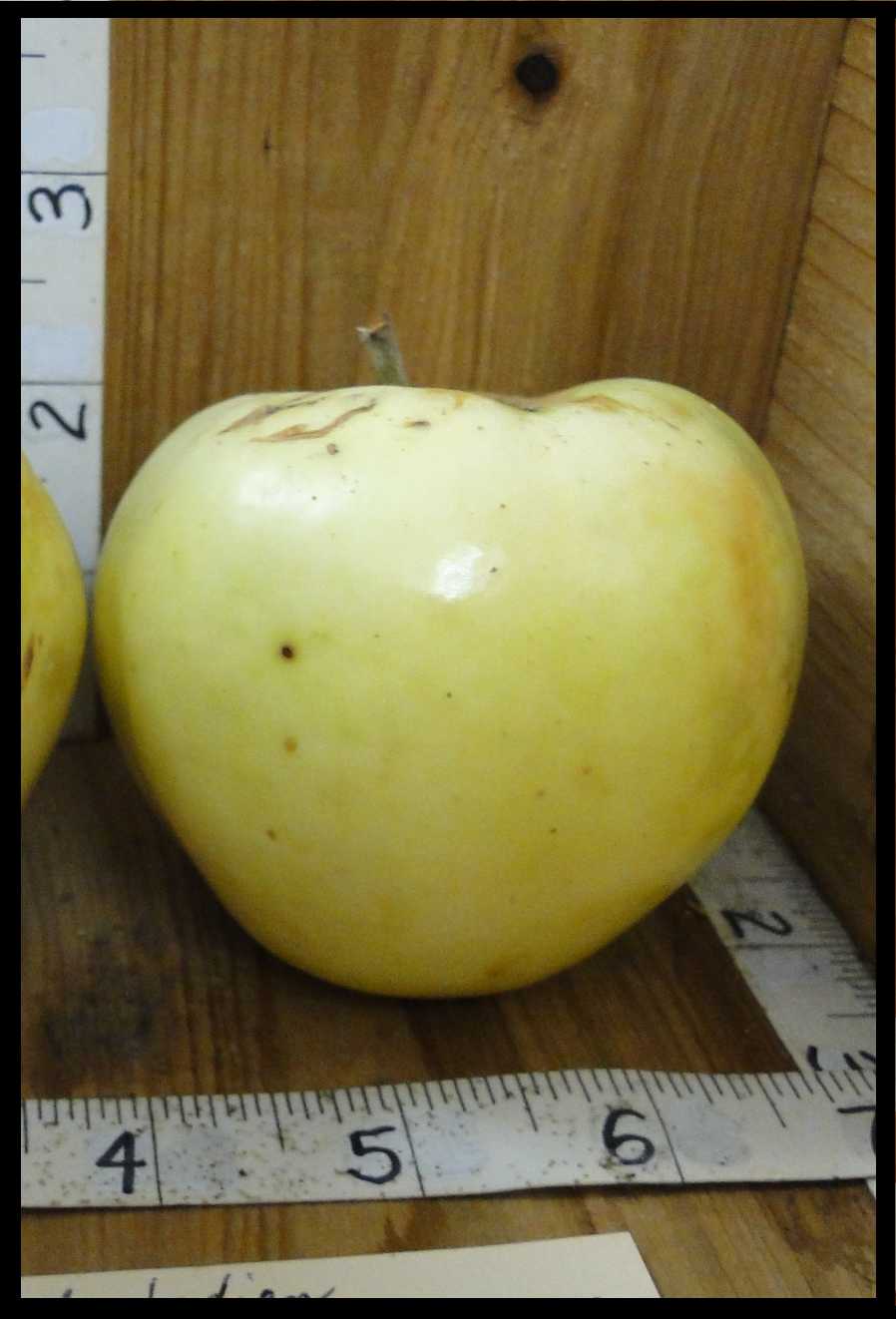 History: An apple by the name of Red Indian was sold in 1858 by Staunton Nurseries of Staunton, Virginia, without description. An apple named Red Indian Sweet, of North Carolina origin, was sold by Lawson’s Nursery in Georgia in the 1980s, but nothing is known of its origin. 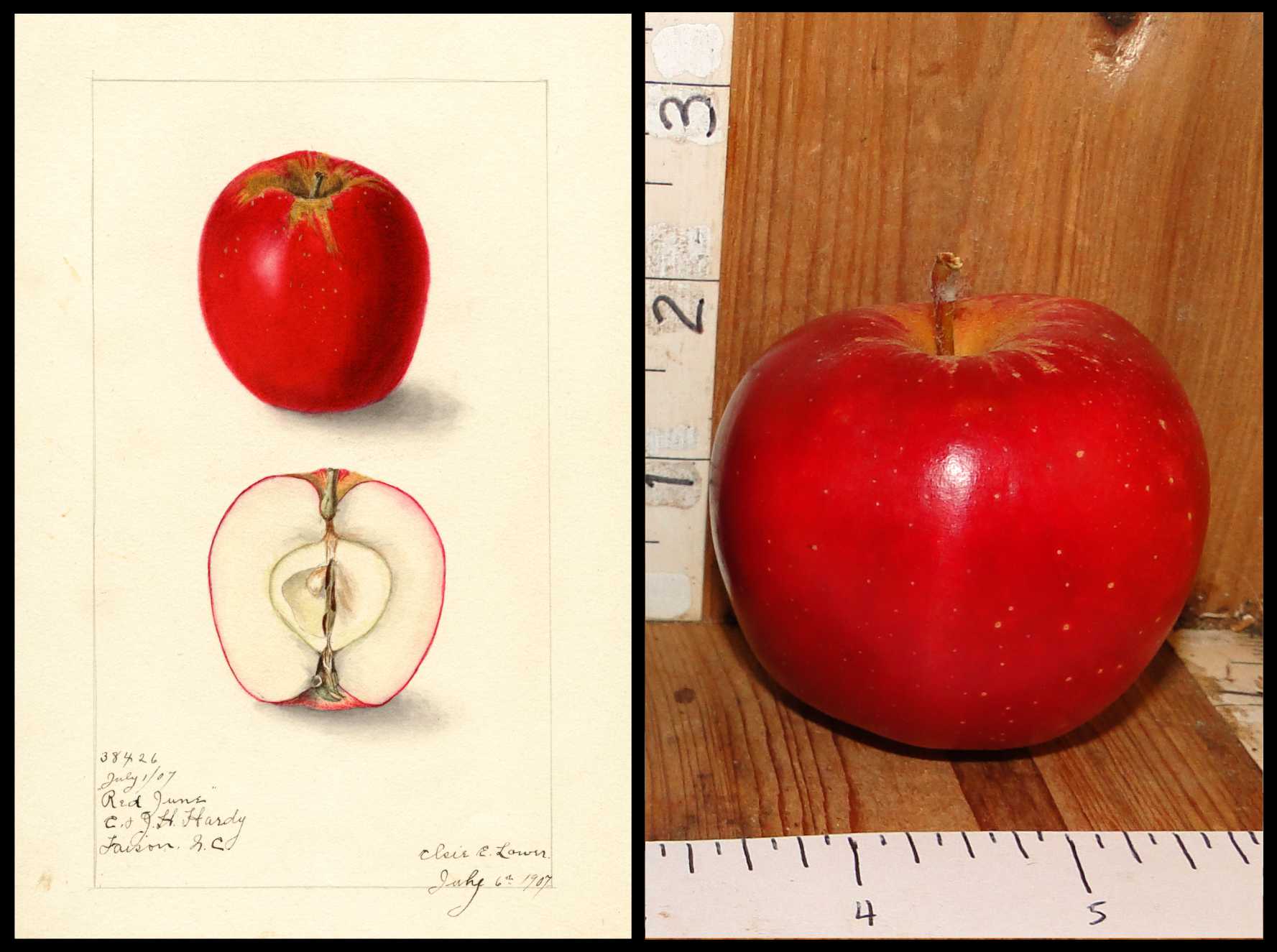 Description: Fruit small to medium, roundish oblong to quite oblong, inclining to conical; skin smooth, almost entirely covered with red, which is darker on the sunny side; dots minute and obscure. Flesh white, sometimes stained red on the sunny side, fine-grained, tender, moderately juicy, brisk subacid. Ripe June/July in most of the South.

History: Early listings of southern apples, in 1798 and 1804 Virginia newspapers, both include a “June Apple.” We cannot be sure that this is Red June. W. H. Ragan, author of the USDA publication Nomenclature of the Apple (1905), left a handwritten “personal recollection” in the USDA files concerning Red June. He wrote that about 1827 a Tennessean named Lewis Shell settled near Mr. Ragan’s father and Indian and brought with him scions of Carolina Red June. This is the earliest reliable report of Carolina Red June and means that his variety certainly originated before 1800. 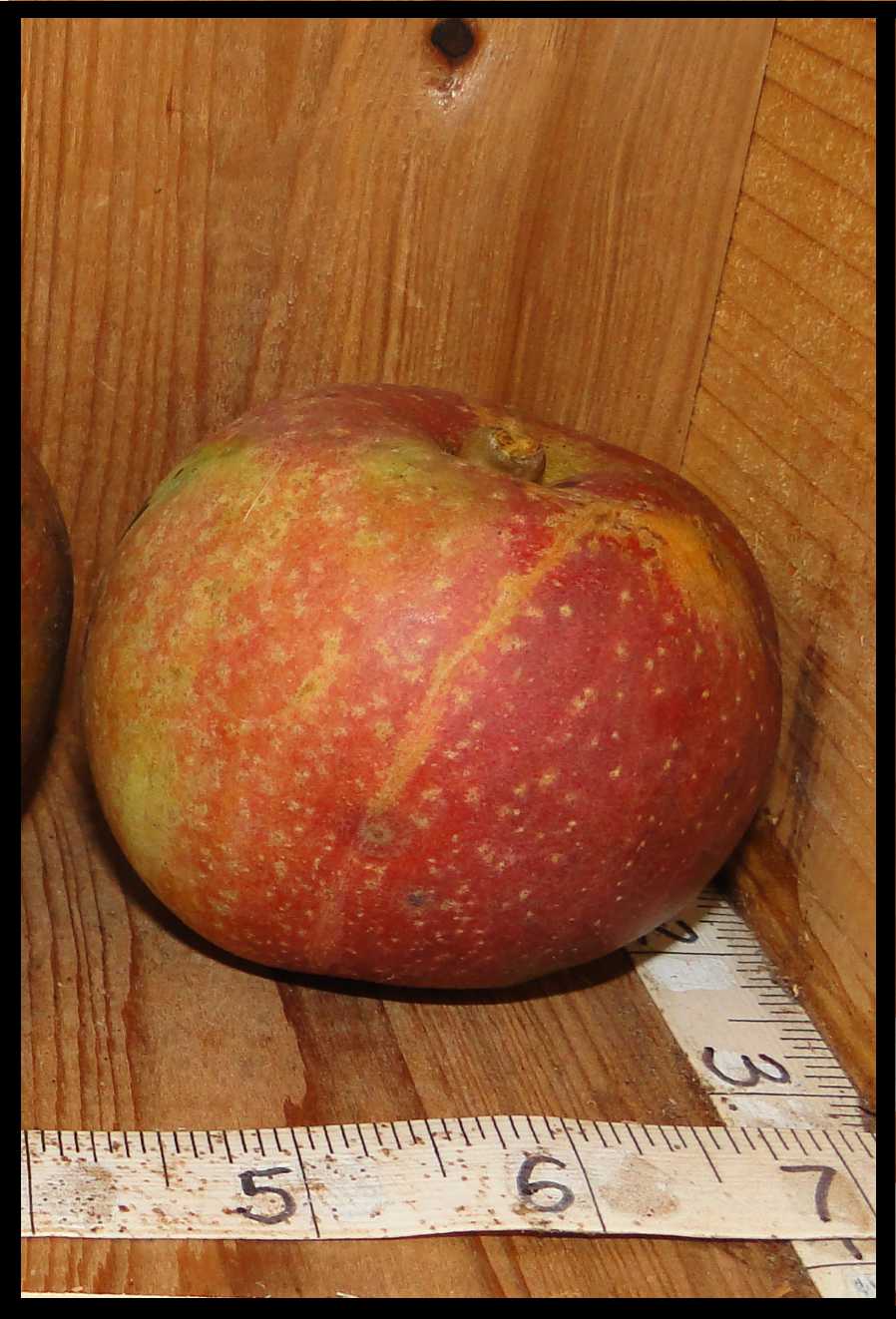 History: This all-purpose winter apple is almost certainly the oldest Limbertwig, and the fruit is an excellent winter keeper. Not of high flavor but improves in storage. 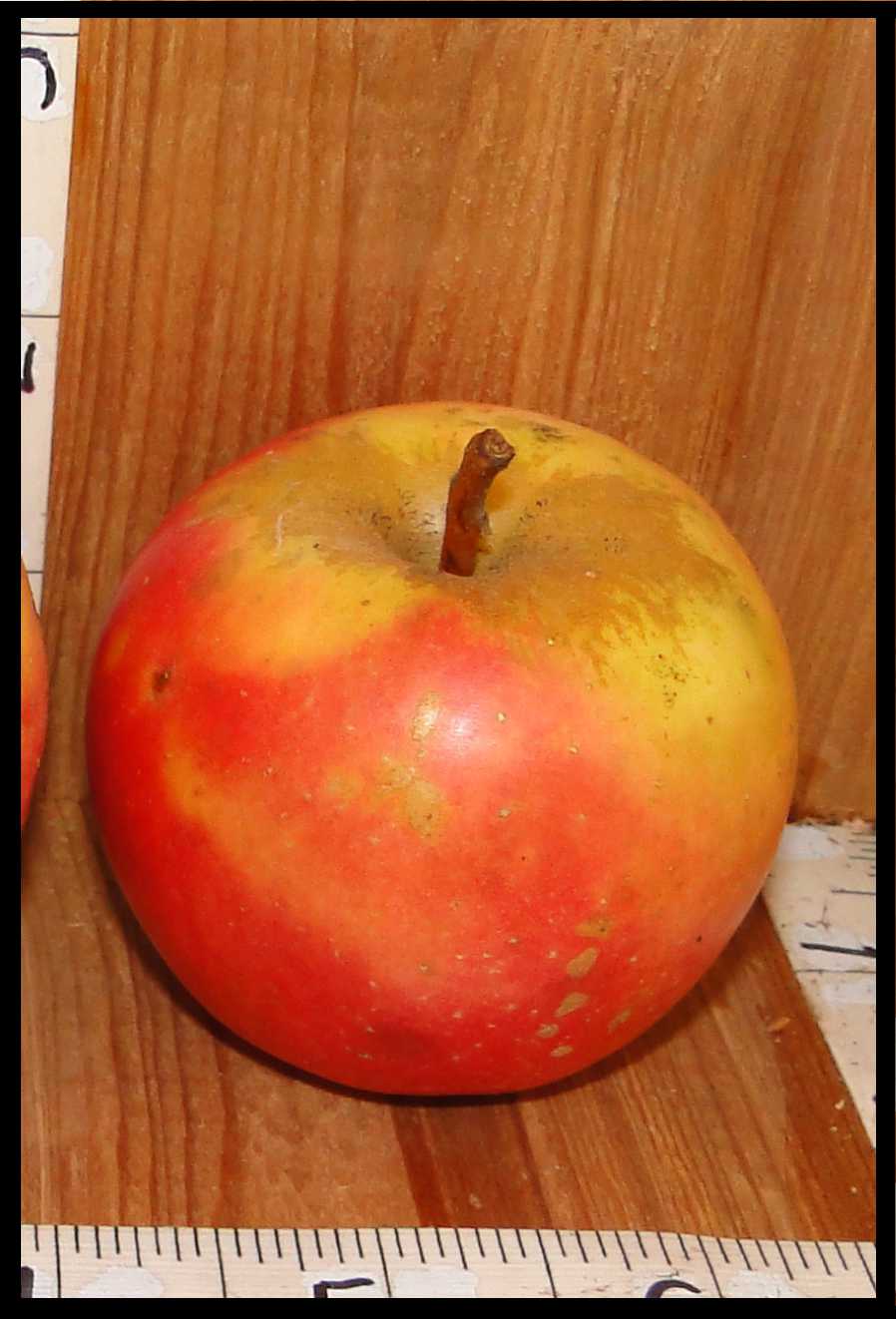 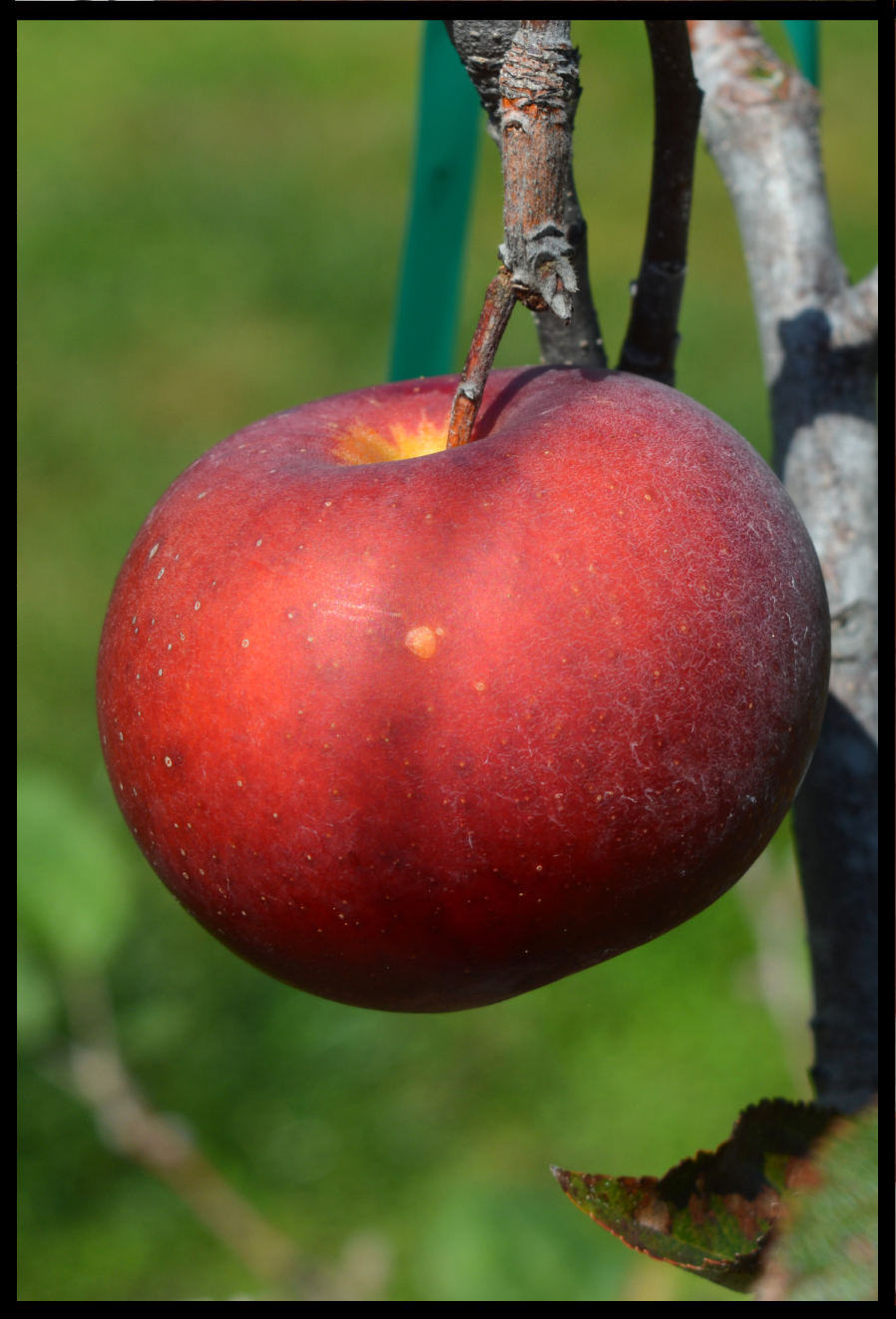 History: Nurserywoman Joyce Neighbors of Gadsden, Alabama, found a tree called Red Rebel in an orchard planted in the 1930s on her sister-in-law’s farm near Wedowee, Alabama.