In 1725, Col. Maurice Moore, of Tuscarora and Yamassee War fame, was granted 1500 acres of land in the Lower Cape Fear region. Moore used 320 of those acres, together with another 20 acres from his brother Roger Moore, to create half-acre lots to make up the town of Brunswick. The first lots sold in 1726 to Moore family friend Cornelius Harnett.1 The name ‘Brunswick’ was meant to honor England’s King George I, who hailed from the German house of Hanover-Brunswick.2 In 1729, New Hanover Precinct was established, with Brunswick as its seat of government.3 In 1731, Brunswick was made the official Port of Entry for all shipping in the Lower Cape Fear region.4 Brunswick was rapidly becoming a profitable venture for the Moore family.

The settlement of the Brunswick area began with Col. Moore and his wealthy friends and relatives. This created a number of positive circumstances. First, these wealthy landowners came from South Carolina, bringing with them capital from the profitable colony and aiding in turning around the poor economic condition of North Carolina. In addition, North Carolina had a colonial stigma as an uncivilized, backwoods borderland by its southern neighbor. When these prominent South Carolinians moved there, their mere presence began to reverse the negative stigma attached to the region.5

The Moores and their prominent family and friends controlled the sale of land, government of the town, and seat of power in the region. They possessed 83,000 of the 105,000 acres that were given in land grants in the region. With the ominous title of “The Family,” they created confrontational situations with any official who did not yield to them. This first happened with George Burrington, an early governor under the Lords Proprietors, whose impetus awarded the Moore brothers their initial land grants in the region. There was friction between Burrington and “The Family,” when the latter no longer supported the views of the former, causing their split.6

The unchecked power of “The Family” was its own undoing. The situation came to a head when Gabriel Johnston was elected governor in 1734. When “The Family” disagreed with Johnston’s way of running the colony, the governor decided to rebel from them by encouraging the growth of a new colonial town sixteen miles upriver from Brunswick. Since its birth in 1733, this town was known by a number of different names until 1740, when it became Wilmington. To spur the movement of colonists from Brunswick to Wilmington, Johnston employed underhanded tactics, such as exaggerating unhealthy and unsatisfactory living conditions in Brunswick and touting conditions in Wilmington. Johnston said to the Executive Council in 1740: “We allow indeed that the Flats below Brunswick may have two feet more water than the Banks below Wilmington. But to balance this, it’s notorious that Brunswick is the most sickly unhealthy place in the whole Colony. In the short time Your Excellency has been in the Government no less than three Collectors of the Customs have died there, and in that Space we can’t recollect above three Housekeepers who lived there at your Excellency’s Arrival who are remaining in it at present. Some few of them indeed removed by reason (as we suppose) of its Sickliness, but the rest as far as we can Judge have been actually killed by the unwholesome water and the Pernicious Vapors rising from the ponds and Marshes with which it is almost Surrounded.”7

The same year, Johnston succeeded in having the courts moved from Brunswick to Wilmington. This was a bold gesture, because the removal of the courts to another town suggested the removal of all government affairs to Wilmington. Brunswick historian Franda D. Pedlow argued that “The location of the Court of Pleas and Quarter Sessions determined the importance of a colonial town since it was the center of activity. All the legal business took place there. Citizens came to buy land, obtain licenses, consult lawyers, act as jurors, and to get news.”8 Afterward, the importance of Brunswick began to decline, a descent which culminated during the Revolutionary War.

Despite this setback, Brunswick continued to thrive in its exports. This was because of the importance of the long-leaf pine along the coastal plains region. Not only did its roots prevent the sandy soil from eroding into the sea, but its abundance allowed for the continued extraction of naval stores: tar, pitch, and turpentine. Pedlow explained the role of these products: “The main use of tar was to preserve rope; turpentine was an important ingredient in paint; and pitch was essential for the caulking of ships.”9 Clearly, these products were crucial to ship building and maintenance, a vital endeavor for the naval power of the British Empire. In fact, the town of Brunswick exported more naval stores in the 1760s than any other colonial port. It represented 70% of the world’s supply of naval stores at this time.10

This economic system reinforced the social system that had been in place since the foundation of Brunswick. To support the large land holdings and difficult work associated with the export of naval stores, it was necessary to have a plantation system in place. Historian Bradford J. Wood explained the curiosity of this situation when he remarked that, while most plantation societies existed after a transformation from a smaller social system, Brunswick actually began as a plantation society. On top of that, most plantations evolved around an agricultural or farming system, while the Lower Cape Fear was concentrated on naval stores instead.11 Indeed, by looking at a map of the region during the eighteenth century, one can see the large number of plantations that grew up on the Lower Cape Fear. 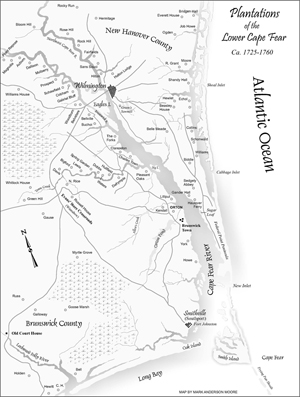 The natural plantation society of Brunswick was reflected in the demographics of the town. Pedlow observed, “In 1767 Brunswick County had a population of 1095 blacks and 224 white people. There were almost 200 families by 1772 with slaves in less than half. William Dry [Colonial Port Collector] had 128 slaves in 1769 and Richard Quince [prominent politician and merchant] had 155 in 1772. No one in the entire state had more slaves. . . . Slaves were as numerous as whites. They were allowed to marry, and each family had its own hut and plot of ground for a garden.”12 While the Trans-Atlantic slave trade was still legal, Brunswick and Wilmington were a major port of entry for ships carrying human cargo, where the Cape Fear River was deep and met the Atlantic Ocean.13 Slave labor allowed the export of naval stores, along with smaller rice and indigo holdings brought up from South Carolina, to thrive in the region, with enslaved peoples working year round making tar, pitch, and turpentine, as well as cultivating the rice and indigo crop.14 While a number of sources exist to describe the state of slavery in North Carolina generally, there has been little research done on the state of slavery in Brunswick Town or the Lower Cape Fear specifically. In addition, because the enslaved peoples did not live in the town of Brunswick proper, but rather on the outskirts in plantations throughout the area, little archaeological findings can help us understand their way of life.