St. Philips Church is the most remarkable structure at Brunswick Town/Fort Anderson, because it is the only above ground structure that is still partially intact. James Sprunt, Cape Fear historian, described the church thus:

"Within the boundaries of this forgotten town are the picturesque ruins of St. Philips Church, which was built by the citizens of Brunswick and principally by the landed gentry about the year 1740. . . . St. Philips Church was built of large brick brought from England. Its walls are nearly 3 feet thick and are solid and almost intact still, the roof and the floor only having disappeared. Its dimensions are nearly as large as those of our modern churches, being 76’ 6”long, 53’ 3” wide, standing walls 24’ 4” and 3 large doors. It must have possessed much architectural beauty and massive grandeur with its high pitched roof, its lofty doors and beautiful chancel windows.1" 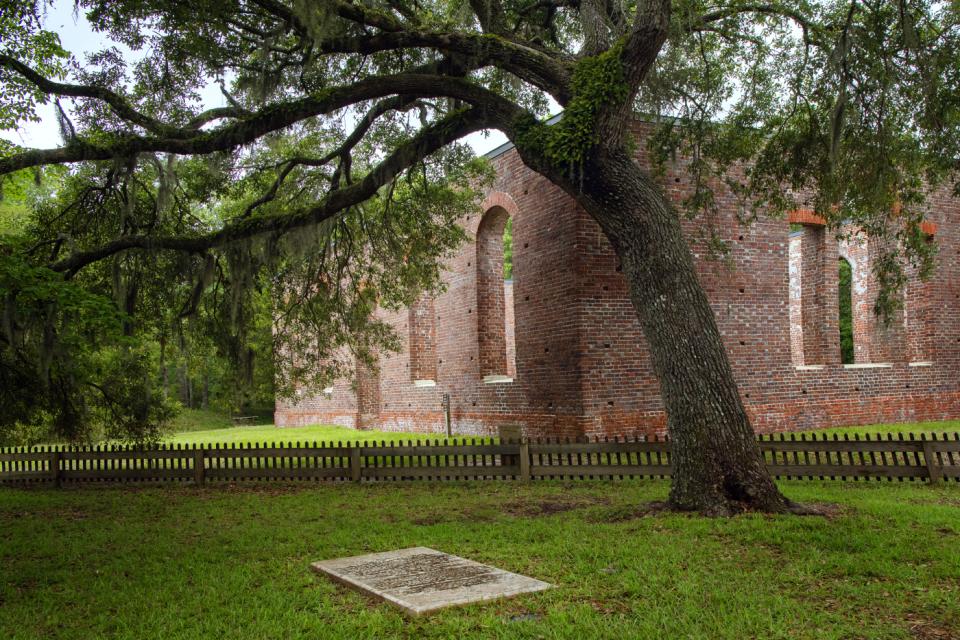 It took many decades and a great deal of effort to build St. Philips Church. The original bill was passed in 1729 that ordered the building of the church of new Hanover County to be at Brunswick Town. However, when the seat of government moved from Brunswick to Wilmington in 1740, so did the county’s church, which led to St. James Church being built at Wilmington.2

The next year, St. Philips Parish in Brunswick was created and began to raise funds to build the church. By 1743, there was still “neither Church nor Chappel” there, much to the chagrin of Rev. James Moir, who left the parish shortly thereafter, complaining about his poor accommodations.3 In November 1754, Governor Dobbs noted that Brunswick planters were “building a large Brick Church 76 feet long by 56 feet wide which they have raised this season so as to cover the windows, and have a House ready for the Parson.”4

The church remained unfinished by 1759, when a lottery was held to raise money to finish the Brunswick and Wilmington churches. Unsuccessful, another lottery was held for the same purpose in 1760. This effort apparently succeeded, and a roof was erected on St. Philips, only to be destroyed by lightning during a summer storm shortly thereafter.5 The building seemed ill-fated, for after its final completion in 1768, it was set ablaze by the British in 1776, seeing only eight years of occupancy. The walls of St. Philips remained intact, but were fired upon during the siege of Fort Anderson. Amazingly, they survived the battle unscathed.6 The magnificent ruins of the church still stand, a testament to visitors of their colonial past. The site is also the final resting place for royal governor Arthur Dobbs and the infant son of royal governor William Tryon.